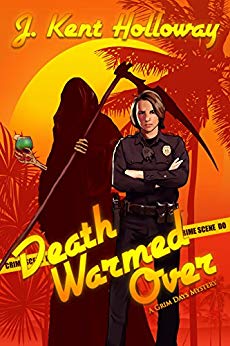 New blog, new features. One of them I want to do every week will be to feature a new book that I’ve either read that particular book or at least read another book from that author.

For the inaugural edition of this feature, I want to talk about the newest release from one of my author friends that I’ve known for several years and who happens to live in the next county down from me at the moment. This book is Death Warmed Over by Kent Holloway.

I did have the privilege of reading this book as an ARC a couple of weeks ago, and I found it to be a refreshing yet familiar tale in the vein of the TV show Lucifer or even the movie Meet Joe Black. Indeed, it almost feels like Kent took those two as inspirations to tell his own tale, and Meet Joe Black is actually referenced in the book itself.

Here, we meet Silas Mot, who as it turns out currently holds the title of Death. But he has a problem – people are dying that are not actually scheduled to die, and he doesn’t know how. So he enlists the local police department and in particular its blonde female Chief to assist him in his investigation even as they work to solve the murder for their own purposes. Mott is presented as the suave, sharply dressed, playful yet serious Death that fans of Lucifer will instantly recognize, though his power set is a bit different – more in line with traditional interpretations of the Grim Reaper than with Tom Ellis’ portrayal of the Angel of Light.

This is the second book published under Holloway’s new publishing company he founded with his friend David Golemon – Golemon’s latest Event Group book being the first. As such, the slightly higher than I typically pay price point of $4.99 is understandable, and really it isn’t out of the normal range of independent Kindle books, if a bit on the high side of that. Still, well worth the money – I bought a copy even though I was given one for free. That’s how much I enjoyed this book.

I’ll leave you with my GoodReads/ Amazon review (I always just copy the GoodReads into Amazon):

Death… Has A Problem. This is a type of tale that will feel familiar to fans of the TV show Lucifer, as it has the same Super-human cop pairing (and even the gender roles being the same), while striking its own tone and tale. And the ending… without going into spoiler territory, it blatantly sets up a sequel while also giving a bit of required reading to get ready for that sequel. (Another tale of Holloway’s that it turns out this is in the universe of – but you’ll have to read to find out which one.) If you like your books nice and tidy, well, Death’s central problem is never fully resolved in this book, but the actual murder in question is. In other words, a solid series opener. I for one can’t wait. 😀