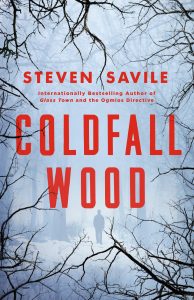 This week, we look at the latest release from another long time friend, Coldfall Wood by Steven Savile.

This book is the sequel to Savile’s late 2017 release, Glass Town, and picks up just some time after the end of that book, immediately dealing with the repercussions of that book – which will reverberate throughout this one. That said, this book can be read first – as I did – as everything that is crucially important from Glass Town is explained again in this book.

The front half of Coldfall Wood is basically setup and transition from Glass Town into the meat of the story of Coldfall Wood. We get a lot of detail about the origins of several new characters, and finally around the halfway point these new characters start to actually work on their mission. And what a mission it is – to destroy modern London and return her to her more natural state. The book actually does an excellent job of showing that everyone is the hero in their own story, that there are few indeed truly bad people. It also has some fairly blatant pro-environmental themes, though those are deftly pit against the idea of “well, we need to change things… but we also can’t just kill the people that are currently here or increase their suffering”.

Fans of fantasy books or Anglophiles generally should truly love this book, as it tends to be an excellent fantasy tale solidly centered on London and British myths of the Horned God, the once and future king, the Wild Hunt, and the surrounding myths.

And now, the “but”. I personally struggled mightily with this book, and both Savile and I thought I might. I’m not a fan of fantasy. As in, almost at all. Particularly the sword and sorcery level that this book gets into. I’m fine with real world stories with fantasy themes where the fantasy is almost a macguffin and/ or just hinted at to establish an overall mythology for a given series, but I just can’t handle the sword and sorcery level fantasy. I never have been able to get into it in text form, going back to some of my earliest reading experiences. So this book was extremely difficult for me – I was barely halfway into this book that Goodreads lists as 336 pages after 7 hours of reading. To put that in perspective, I normally read books twice that long in less time – and indeed did so just this past weekend with another author friend who I’ve known nearly as long as Savile and met in the same place I met him.

So this book just wasn’t for me, but it was extremely well written and a compelling story generally – one I personally would love to see in movie format, as I think it could do well in that medium. (And again, I have a history of being able to enjoy fantasy stories there – I’ve never been able to read more than a paragraph of Lord of the Rings, yet I *love* those movies.) Because of this, I gave Coldfall Wood 4 stars.

As always, here is my Goodreads/ Amazon review:

British Fantasy. If you like fantasy books and/ or happen to be an Anglophile, this book is definitely up your alley. It starts out a bit after Saville’s prior book, Glass Town, but can be read independently of that book – as I did. We encounter a cop in modern day London dealing with the fallout of the events of Glass Town, but we also encounter a Muslim kid executing an honor killing and a pair of racists who beat up a star soccer player who happens to be Muslim in retaliation, as well as a pair of burglars encountering a very strange house. The first half of the book sets the world for this particular tale, and the back half of the book is the Battle for London. All in all, an excellent effort from Saville, and recommended, as I said at the beginning, for fantasy lovers and/ or Anglophiles.

Caveat: I myself am neither, and thus even while intrigued by the premise and story, I struggled a bit with it. Hence the 4 stars for what really would be a 5 star tale if I was more into its genre.