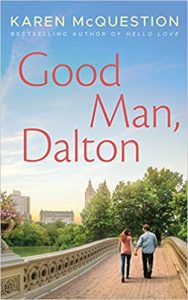 Laugh Out Loud Yet Thought Provoking. This book can be read as a straight fish out of water romantic comedy, and it works well in that regard (and the back half of it is mostly just this). But where its true power lies is in the questions it provokes in the separate paths our leads take to meeting each other by chance halfway through the book. Greta’s front half is an examination of the reality of social media and reality TV, particularly for those who are hyper=focused about monetizing it. The titular Dalton’s front half poses some intriguing looks at the realities of homelessness, specifically as it relates to New York City but even, it seems, as a more general concern. Overall a truly exceptional work that can be read in multiple ways and still work well no matter what your particular focus is on. Very much looking forward to future work from this author.

One Reply to “Featured New Release Of The Week: Good Man, Dalton by Karen McQuestion”