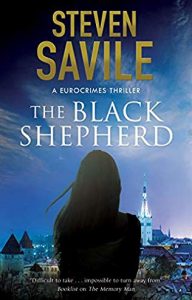 This week we look at an explosive tale of kidnapping, homelessness, brainwashing, and human trafficking. This week, we’re looking at The Black Shepherd by Steven Savile.

Whereas in the first book in this series The Memory Man (a former Featured New Release here itself), Savile put the Catholic Church firmly in his crosshairs with a tale centered on abuse within the Church, for this outing with Ash and Varg, he picks up a few months after the endgame of that book and puts his crosshairs firmly on a fictitious religion eerily similar to reports of the real-life Church of Scientology. Many of the familiar faces from the first book – at least among those who survive it – show up for this outing, and Savile even fleshes out the Division a bit more here.

Savile does an excellent job of briefly examining the realities of homelessness in Europe (and the Western world for that matter) and having his characters at least consider the impact of what they may well have to do will be on those who can least afford to be further harmed. Yet he never loses focus on the overall mystery involved here, and the action and intrigue are well paced.

The one thing that was a bit off-putting about this book was the rather abrupt ending wherein he blatantly sets a sequel in motion and leaves a bit of a cliffhanger. Perhaps the ending could feel a bit less abrupt with a simple change on the title of the final chapter – instead of calling it just “Chapter 69”, call it an “Epilogue” and the reader would know that this is truly the wrap up / set up the next book chapter, which isn’t always implied just by being the last chapter.

Still, a very strong tale that takes the form of a police procedural / action book to ask much larger questions, much as its predecessor did. Very much recommended, and I’m very much looking forward to the as-yet-unannounced sequel.

Excellent Continuation. This book picks up shortly after The Memory Man leaves off, with some major changes for the team – yet can also be read independently of the first, if you don’t mind getting references to the ending of the first book while reading this one. Yet again, Varg and Ash find themselves starting a seemingly straightforward quest only for it to spiral into so much more very quickly. I will note that those sensitive to rape scenes will likely be disturbed by one scene in particular early – a not-overly-graphic rape is described “on screen” – and potentially by later developments in the story, though later scenes are likely not as problematic for people with these sensitivities as the early scene. Overall yet another very strong outing for Savile, and particularly with the rather abrupt ending in a cliffhanger, I very much want to see at least one more book in this series. Very much recommended.