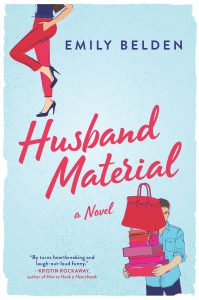 As a romantic comedy, this book falls into the “zany/ WTF” kind of mold. A “numbers girl” who has recreated herself as a software engineer following the death of her husband after just a single year of marriage in her mid 20s finds out that sometimes life itself isn’t nearly so clean as numbers and code. And sometimes that is actually a very good thing.

From a more technical standpoint… it is pretty clear that the author herself is not a coder. Much of the plot revolves around our main character constantly “tweaking the algorithm” to match certain desired outcomes. Including using the same program designed to demo-mine social media to help companies target their advertising to also attempt to determine whether or not potential dates match her own desires. From a non-programmer perspective, I can see where a non-techie would think the two ideas are close enough that it would be plausible that the same code and algorithms could do both tasks. As an experienced Senior Developer with now 20 years of programming knowledge and 13 years of professional corporate level experience… yeah, no. Doing both is very doable, and in fact I’m aware of real world programs that do either/ or. And while yes, the actual algorithms themselves are at least superficially similar – you’re scanning a particular thing and looking for matches to a given set of criteria – the actual implementation details would be too dissimilar to keep even within the same project and likely even within the same database. (Though *perhaps* a strategy could be arranged that they could share at least the same database but with only a few tables referenced by both projects.)

Regardless of the technical inaccuracies though, the overall point of the book is that our lead character has dived into the programming side specifically because she is running away from living in the actual real world of breathing human beings, and that is something that many of us in this field come face to face with at some point in our careers – particularly after long and detailed projects that force us to dive deep for a while. And in that scenario was very much relatable indeed to many of us, and in the particulars of what is going on in that real world is at least somewhat relatable to many beyond our field.

Ultimately a story of actually healing long after you had thought you had healed from a tragedy, this is a story that is very much recommended for all.

Numbers Don’t Lie, But People Do. This was a tragi-comedy of a widow finding herself -at a point when she thought she had already done so. Enough humor to keep a light-ish tone to what could have become a very dour subject matter, this book manages to combine quasi-software engineering (even the best of us can’t do what the lead does in this book) with a tale of picking yourself up by the bootstraps… twice. Very much recommended.

Note: Since the publisher requested it, here is a note that I did in fact receive this book as an ARC. As *always* with *any* of my reviews, my thoughts are completely my own and I review absolutely any book I read, no matter how I acquired it.