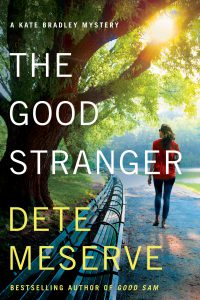 This week we’re diving back into Dete Meserve’s world of strangers doing good deeds. This week, we’ve looking at The Good Stranger by Dete Meserve.

Meserve had the initial draft of this book written roughly a year ago, and she finished the last edits sometime in October 2019 (yes, I asked, due to what I’m about to point out). And in this book, she has a character point blank say that “the next pandemic is not a matter of if, but when”. Notice when I said she finished writing this book. 😉

With Meserve’s own efforts over the last couple of years, and with the focus of this book in particular, I want to use this space to talk about some real world “good strangers”.

The first one I want to highlight is the most personal to me. My parents, and in particular my mom, have been working in their community through their church’s bus ministry for 25 years now. They started when I was barely a teen, and in those early years I was also part of their work, both in reaching out to the community and, in my specific role on Sunday mornings, actually knocking on doors to let the people who had said they would be interested in coming to church with us know that we were there and helping them safely onto the bus. But my mom really is the workhorse here. For 25 years, she has worked among the poorest of our community there within the few mile area of her home. Some of the bigger trailer parks in our County were right there, and they weren’t exactly the most prosperous neighborhoods in town. With the Sole Commissioner’s declarations there over the last decade or so, things have really only gotten worse for many of these people. But my mom does what she can for them. She gives them some form of breakfast every Sunday morning, knowing that for at least some of them, it is the only meal they will have that day. When she sees a need of one of her families for food or clothing or even help paying the utility bills, she has corralled and cajoled the church to getting what those families need. She has damn near gone to war with many a pastor of that church over the years, including one man – whose vision created the bus ministry at that church – who would go on to become President of the Georgia Baptist Convention. The incident a few years ago where 17yo Christopher Roupe was gunned down by a police officer in his trailer as he answered the door when she knocked? I had met Christopher when he was a toddler. He had been one of our bus kids in those early years. But while my mom isn’t a “good stranger” of the sort this book centers on – the people she is helping know exactly who she is and what she represents- she is one of the very “behind the scenes” type heroes that Meserve makes it a point to highlight in this story. If you would like to help fund these efforts, you can go to this site, Click “Give”, then select “Designated” in the “To” drop down. Then, in the note / memo area (just below where you enter your credit card number), enter “bus ministry”.

The second is a friend of the last few years who lives down in Puerto Vallarta, Mexico. He runs a BBQ joint down there that is currently shut down due to COVID19 concerns, but in the midst of the shutdown and knowing how desperate people in his community are for food, he has helped organize a food bank, set up feeding stations for the area dogs, and delivered thousands of pounds of food directly to peoples’ homes – all in just the last few weeks. A while back he – a former US soldier – was involved in the rescue of a local young girl who had been kidnapped for sex trafficking. He is very much one of those people who is active in his community and doesn’t hesitate to solve any need he can, any where he can. Again, the very type of unsung hero Meserve highlights in this book. If you’d like to find out how to help him with the food bank in particular, you can click here for that information.

The third “good stranger” I want to highlight is an organization, rather than a person – though its creator’s story is awesome as well. There are a lot of people all over the world that talk about how bad the problem of the Great Pacific Garbage Patch is. A few years ago now, Boyan Slat decided to actually do something about it. He created The Ocean Cleanup, and they’ve now deployed a test system to actually begin to clean up the trash from the Great Pacific Garbage Patch. But not only that, they recognized that one way to reduce the size of the Patch was to prevent garbage from getting there in the first place – they needed a way to capture the garbage before it left the rivers (the primary source of garbage making it to the Patch). So they solved that problem too, and have already been deploying Interceptor craft to rivers across Asia for several months now. These guys are more well known that my mom or my friend, but considering the work they are doing they are, to my mind, still not as famous as they should be.

These are just a few of the people doing good in the community, often in ways that go unreported or underreported. Feel free to reply here or in any thread this review appears with people and organizations you know about who are doing similar direct, unreported work. Let’s give these heroes some of the recognition they deserve.

And as always, the GoodReads/ Amazon review:

A Book For Our Time. “The next pandemic is a matter of if, not when.” Yes, that line is in this book. Yes, Meserve finished writing this book by Halloween 2019. No, this book doesn’t actually have anything to do with that line in particular, it is simply a throwaway bit of a random interview that wasn’t even Kate Bradley’s interview. 😀 But what this book *does* focus on is the very same things Meserve herself has begun to focus on over the last few years, both with these Kate Bradley stories and with her own outreach: finding the everyday, unsung acts of kindness all around us. Reporting on that. Promoting that. Though with this book, for the very first time in a Bradley book – and contrary to what Ayn Rand may think -, we find someone truly altruistic. Someone genuinely not interested in any form of personal gain beyond the personal satisfaction that they know they did a good thing for someone who needed it. So let’s take a page from Bradley and Meserve. Let’s highlight some of these stories ourselves. Very much recommended.