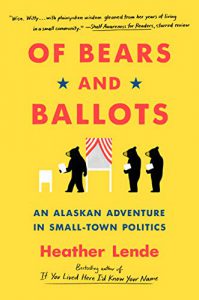 Reminiscent of The American President, To A Point. This is a tale of a small town grandmother’s one and only City Council run in a small rural Alaskan town that happens to have a couple of major connections: It is the home of Glacier Point -a major Alaskan cruise stop -and it is the hometown of Parker Schnabel of Discovery Channel’s Gold Rush family of shows. Both of which actually play heavily into the narrative here, as they both came up repeatedly in Lende’s singular three year term from 2016 – 2019.

Overall Lende is at times hopeful, at other times remorseful, and at still others a bit wistful. In both her politics and her overruling desire for basic decency, she even manages to evoke Michael Douglas’ portrayal of President Andrew Shepherd in The American President, again, at least to a point. She manages to be seemingly honest about at least her thoughts and motivations during the various events and controversies of the three years, and in so doing provides an insight into what being on a small town City Council really can be like. Very much recommended.