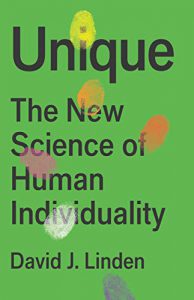 Given the topics Linden discusses here – among them sex, gender, sexuality, race, experience, even memory and sense – it is incredibly easy, maybe even tempting, for many authors of science books to wax at least somewhat political even while discussing the science of a given topic. Indeed, many do.

Linden does not, and that is one of the greatest strengths of this book.

Instead, Linden focuses *exactly* on where the science of the issue currently is, and says it with a fair degree of specificity. Such as instead of saying “many”, he’ll say “30%” – even if the exact number may be 27.84% or 32.16%, “30%” is close enough for those of us just trying for a general understanding of the topic at hand, and far more precise than many authors will give. Further, if the science is changing or inconclusive on a given topic, Linden notes this as well, at times even clearly noting where he himself has reviewed the research at hand.

Ultimately, the book does a truly remarkable job of explaining what we currently know about the science of human variance and how all of these combinations form to make an individual… well, an individual. Truly a remarkable read, and one that many would do well to read. 🙂 Very much recommended.

As always, the Goodreads/ BookBub review:

Utterly Fascinating. With this book, David Linden looks to the genetic – and thus, biological – factors of human individuality, from sex to race to neurology to senses and everything in between. The science is well documented – roughly 30% of the version of the book I read is bibliography – and recent – some citations were from 2019, when presumably the book was being written. It is also well balanced politically, stating with a fair degree of exactitude what the science currently says on any number of issues without going into the political debates surrounding those issues – including sex, gender, sexuality, and race specifically. Overall truly a fascinating deep dive that is incredibly readable while also being so exact, and thus one of the better science books I’ve encountered this year. Very much recommended.