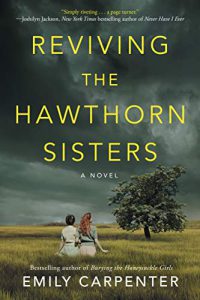 This week we’re looking at a book marketed as gothic literature but which actually tells a strong dual timeline tale of survival in the Great Depression South. This week, we’re looking at Reviving the Hawthorn Sisters by Emily Carpenter.

Upfront, I want to note that this was a strong dual-timeline family mystery. It was very well written and particularly with having spent most of my life in the region, utterly believable in every facet of this story. Carpenter has truly done some outstanding work here.

Indeed, my only issue here isn’t the actual book itself, but the marketing of it, which features the word “gothic” prominently and heavily.

“Gothic literature”, per this first result on the term when doing a Google search, is:

In the most general terms, ​Gothic literature can be defined as writing that employs dark and picturesque scenery, startling and melodramatic narrative devices, and an overall atmosphere of exoticism, mystery, fear, and dread. Often, a Gothic novel or story will revolve around a large, ancient house that conceals a terrible secret or serves as the refuge of an especially frightening and threatening character.

Despite the fairly common use of this bleak motif, Gothic writers have also used supernatural elements, touches of romance, well-known historical characters, and travel and adventure narratives to entertain their readers. The type is a subgenre of Romantic literature—that’s Romantic the period, not romance novels with breathless lovers with wind-swept hair on their paperback covers—and much fiction today stems from it.

When I personally think of Gothic literature, I tend to think more in terms of Edgar Allan Poe or Kim Taylor Blakemore’s The Companion, as I mention in the Goodreads review below. Those definitely fit that first paragraph above.

Hawthorn, however, more meets the second paragraph above. There are touches of the supernatural and of romance, Billy Sunday in particular appears, and there is a fair amount of travel and adventure as it relates to the church revival circuit in particular.

Don’t Let ‘Gothic’ Scare You Here. I picked this book up on the strength of the publisher, Lake Union. But honestly, the marketing scared me a bit with the emphasis on calling this a ‘gothic’ book. When I think ‘gothic’, I think Edgar Allan Poe or perhaps fellow LU book The Companion by Kim Taylor Blakemore – period pieces set in the late 19th/ early 2oth century in old buildings.

This book… wasn’t that. Yes, it uses an old-school sanitarium as the place of its beginnings – an orphan managed to escape there long ago, and in the present timeline, that orphan’s granddaughter is now trying to redeem the building.

But really, the story here is told in dual timelines and features one woman just trying to survive in Great Depression/ WWII era Alabama, while the other woman tries to solve a mystery over the legacy of the first woman in modern day Alabama. In other words, standard-ish dual-timeline women’s fiction – and really solidly written story that sucks you right in.

Growing up in the region in modern ish times, I could absolutely see much of this book playing out largely the way it did, the cultural touchpoints were truly spot on in both the period and modern touches.

Ultimately a strong work, and very much recommended.