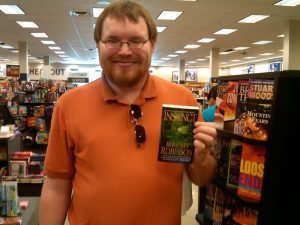 There are a few authors who I read virtually everything they write. Early on, they included Tom Clancy and Stephen Coonts, and as I matured I moved on to guys like Dale Brown, Douglas Preston & Lincoln Child, and Lee Child.

A couple of years ago, when I was still active on MySpace, a new, self-published (at the time) author friended me, and I bought a couple of his early books.

I’ve been hooked ever since.

The author in question is one you’ve probably never heard of, but need to if you like solid action-adventure books. You know, the kind that you just do NOT want to put down, where the action is almost non-stop, balls-to-the-wall, what’s-gonna-happen-next kinda stuff.

His name is Jeremy Robinson. He claimed that in writing his latest Kindle-only book, THE LAST HUNTER, that it was his best yet, so I wanted to attempt to rank each of his books thus far on my own scale.

ANTARKTOS RISING was the first I read from him. This is a disaster story unlike any you’ve ever seen. It starts out looking like Day After Tomorrow, winds up looking like 2012 – and that is just the beginning. After the crustal displacement (ala 2012), Antarctica is now situated along the equator, and the ice melts off. The earth’s remaining population, eager for new land now that much of the former Northern Hemisphere is frozen solid, sees this new land as the perfect place to relocate, and a contest is divised between several nations, with a single goal: whoever gets to the center of the island first gets the prize. What they don’t know is that the island isn’t as devoid of life as they think – ancient life of Biblical proportions…

THE DIDYMUS CONTINGENCY is a time travel tale of a man and his colleague who invent a time travel device. The man, deeply scarred by the loss of his wife years earlier, uses the machine to travel back to the time of Christ in an effort to discredit Christ. Without giving too much away, suffice it to say that the book offers a new and fairly unique look at the life of Christ, and the overall story is filled with so many twists and turns, some of which are Bill Myers-level mindblowing.

KRONOS takes the Jonah legend and basically says “what if the fish were still alive?”.

PULSE is the first adventure of Robinson’s Chess Team – Bishop, Rook, Knight, Queen, and their leader, King. These are a super-super secret group of Delta Force veterans that not even Delta is allowed to know about. In this one, a modern day genetics company is involved in trying to find a way to enable human regeneration – of any body part, including the head. Along the way, they discover the ancient epitome of regeneration – the Hydra. There’s a problem though: all of the company’s test subjects turn into zombie-like killing machines that are nearly impossible to kill thanks to their regenerative powers. The Chess Team must find a way to stop these monsters – and more – while fighting a desperate battle to stay alive.

INSTINCT is the second Chess Team book, and whereas Pulse was a globetrotter, this one is largely set in one location – a remote area of virgin forest along the Cambodia/Laos/Vietnam border. A virus has been unleashed that can and will kill every male on the planet if a cure is not found – and it is only discovered after it does, in fact, kill the President of the United States of America. The Chess Team is sent to the forest along with Pawn, a CDC scientist, to track down the cure and bring it back. Can they do it in time?

BEYOND is a pure science fiction tale of the discovery of life on Europa, a moon of Jupiter. After a meteorite strikes in the Arctic and shows signs of life, a team is sent to Europa to find out what else is there. Just remember: in space, no one can hear you scream. 😉 (2018 Note: This book is now called BENEATH.)

THE LAST HUNTER is a tale based in the ANTARKTOS RISING world, predating Rising by a few decades. In it, a 13 year old boy goes back to Antarctica, the land of his birth, with his family. While there, he is abducted and broken, forced to learn an entirely knew way of life. In time, he is shown what his captors expect from him – but what they don’t know is that he is far more powerful than they’ve ever dreamed. This book is part one of what Robinson says will be a 6 part series: 3 leading up to Rising, one paralleling Rising, and 2 concluding the Rising story. (2018 Note: This book is now called THE LAST HUNTER: DESCENT. The entire Last Hunter saga can be found in THE LAST HUNTER: COLLECTED EDITION.)

Now, ranking these, I think I’ll go with this:
END_OF_DOCUMENT_TOKEN_TO_BE_REPLACED