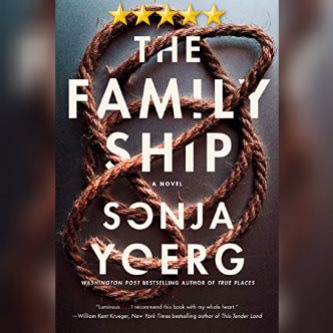 Blame And Forgiveness. Let’s face it, the central conceit of this tale – a mostly abandoned boat left on a property that a family purchases that the parents and older kids then use as a mechanism to control the younger kids – is a bit… strange. And I note this as the son of two people who both had six or more siblings each – so while I only have two brothers myself, large family dynamics are not completely foreign to me. This noted, once your brain accepts the central conceit here, the actual story is truly a very solid one of finding oneself, struggling with roles that are not always chosen and not always permanent – both by choice and by situation, and, ultimately, self-recrimination of past wrongs and the need to forgive both yourself and others. The back half *really* picks up, and actually features a scene reminiscent of one particular story of my own family history that I was told for years – in this case, a particular confrontation at a particularly … inopportune… time. (Doing my best to note that this was a phenomenal scene without giving much away, since it *does* happen in the climax of the tale.)

Ultimately, those who have only known smaller families – where you and your entire family you’ve ever known have had the stereotypical-ish 2-3 kids or less – may struggle a bit with keeping up with the fairly large family and the dynamics therein. But work with it, because most everyone gets their chance to be a mostly-realized age-appropriate actual person… even as most of the actual action really does focus on the more senior people. (In other words, even the toddlers get a chance to be toddlers, but the teens and adults ultimately drive the story.)

Truly a great work, and a Toby Keith level master class in “I can spin off a story about anything”. (Look up the story of TK’s “Red Solo Cup” to understand that reference. 😉 )

This review of The Family Ship by Sonja Yoerg was originally written on February 15, 2021.