Interesting Yet Ultimately Self-Serving Take On Rights. This book presents as an interesting and novel (at least in an American sense) take on rights – namely, that they are not absolute and should be mediated by government actions. Greene claims that this would ultimately result in less polarization, though he seems to ignore large swaths of what has led to the polarization currently facing America when making such claims. Still, even though blatantly written from a leftist perspective, the book mostly presents its theory in a reasonably well-reasoned approach and thus adds enough to the overall conversation that it should be considered. Ultimately, though, it becomes clear that Greene’s entire premise of mediated rights is less a matter of principle or proposing a novel theory or (as he claims) more aligning American jurisprudence with that of much of the rest of the world and much more about defending Big Academia’s right to discriminate against the disabled and against certain races, and to control speech in a totalitarian manner. It is this realization – very blatant in the closing chapters, particularly when discussing Affirmative Action and campus speech codes – that ultimately considerably detracts from the overall merit of the proposal, and thus dramatically weakens the entire argument. Recommended.

This review of How Rights Went Wrong by Jamal Greene was originally written on October 16, 2020. 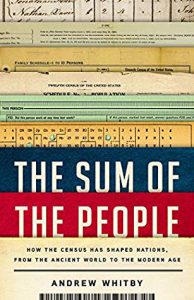 This week we’re looking at a history of the origins and current uses of the census – at the very time the United States Census officially begins. This week, we’re looking at The Sum of Us The People by Andrew Whitby.

I don’t exactly hide the fact that despite reading quite a few books, at heart I’m a numbers and computing guy. And few things get more numeric than efforts to count literally billions of people around the world in the span of just a year or two – the very subject of this book, and efforts that officially began a couple of months ago when this post (and the book it is about) are published. (I sit here writing this post on New Year’s Day 2020, having made this book the first book I read in the year the Census begins in the US.)

And y’all, Whitby does a seemingly excellent job of taking a complex and complicated subject like the modern realities of counting people – particularly when such counts can lead to shifts in power – and boiling it down so that anyone, even those without the mathematical foundations Whitby and I share a portion of, can understand what is happening, why, and why both are important. He states early on that a primary goal is writing a book that can be understood by most anyone, and to me it seems he has done an exemplary job of this.

I might nitpick about his discussions of the beginnings of computing and even the mathematics of statistics as its own field of study (among others), but neither does my own cursory knowledge of those areas allow me to outright refute them. So while I tend to think that he *may* have overstated his case in believing that these things came about due to a need to count people, I cannot be positive of this and his arguments are well documented and worthy of critical examination. (And here, he has provided nearly 25% of this text in notes and bibliography – generally a sign of a very thoroughly researched and presented discussion, in my experience.)

Truly a fascinating book, and one anyone remotely interested in the how or why of a census should read. Very much recommended.