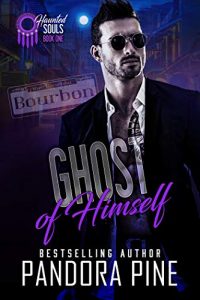 This was an excellent entry point into an existing well-established world. You get enough of a sense of the larger world without being overwhelmed in the details and thus not being able to enjoy the particular story you are currently reading. Indeed, just the opposite is true: the current story is the laser focus at all times, and you get just enough background to understand where the various existing players are coming from while whetting your appetite to find out exactly how they arrived at their current locations. Case in point being one half of the focal couple of this very slow burn romance – private investigator Jude Byrne. He is one of many links to the previously existing world, finally getting his own story in this spinoff series, and apparently he has been quite… open… with the sheer volume of partners he has bedded. Apparent series newcomer pyschic witch Copeland Forbes has been a bit more selective with his lovers, but is certainly no prude himself.

MM romance enthusiasts will likely be dismayed to realize there is no penetrative sex in this particular tale – as I said, it is truly a slow burn romance – though it does have some sexual activity, as one would expect from most modern romances outside of certain particular subgenres. But that is the only minor quibble to be had here and that is mostly just the lack of a genre trope. Otherwise, this truly is a strong tale in its own right that serves as an excellent launching pad for its own series within this larger world, while also getting new readers interested in learning about that larger world. Outstanding on all points, and very much recommended.

Holy Spirits! This book was a solid introduction for me to yet another new to me author. As it turns out, while it says that it is the first in a series, it is the first in a *spinoff* series where the characters from the original series still make a very heavy, central, and indeed pivotal appearance. (Indeed, one half of the couple featured in this very slow burn romance was originally introduced in the older series and apparently plays significant supporting roles in some of those books, based on what other reviews say about him.) I can tell you from having no exposure to the larger series that this book is perfectly understandable without it, and you get solid characterization of the previously existing characters as well as the new characters introduced here. Overall a strong, solid story, and one that will very likely have me going back to read the larger series *as well as* looking forward to the continuation of the new spinoff series.