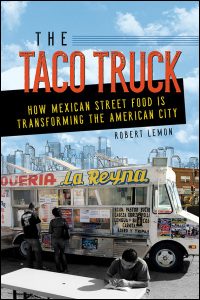 This book was absolutely fascinating, but I gotta admit: It was one of the more dry academic oriented books I’ve read in the last few years, and thus is was very difficult for me to read with my eyes. Fortunately my Kindle Fires have a solid text-to-speech ability, and I was able to consume the book that way very well.

And what a book it really was. Very nearly as comprehensive in its subject as Radley Balko’s Rise of the Warrior Cop was in its own subject several years ago, the author spends a few pages grounding us in the history of street food in Central American culture before following these people north in the era before the United States’ westward expansion. He then spends quite a bit of the book showing the deeper history as well as the more current history of the last 40 years or so of how taco trucks in northern California – the Bay Area and Sacramento in particular – have evolved as more efforts at centralized urban planning have forced them out of their original purposes and locations and into new roles, just to stay in business. We then jump nearly to the opposite coast and spend a fair amount of time examining a similar evolution in Columbus, OH, and how there in particular taco trucks have become a cultural melting pot. Along the way, we also see the foodie/ food truck movement of the last decade develop and how it is different from – and, the author argues, appropriating of – the original taco truck culture.

Overall this was truly a fascinating book, though the dry prose makes it a very tough read. But those that can fight through the read will have found a very special look at an often overlooked facet of the American Dream, and for that they will be at least a bit better than they were before reading this text. Very much recommended reading.

Intriguing Investigation. This academic study of exactly what is a ‘taco truck’ – and yes, the author makes a very clear distinction between the original concept of a taco truck vs the food trucks so common in American cities and American media today – and how the practices of taco trucks enabled and evolved with and through the food truck revolution truly is extremely intriguing. The dry academic prose is a bit of a knock for a more widespread audience, which could benefit from reading the analysis here, but is surmountable – I personally used my Kindle Fire’s text to speech option, and in that manner I was able to process the book far more readily. In particular, the various ways the taco trucks and later food trucks have anarchically evolved in each of the three markets studied was simply amazing to see, and the author’s in depth knowledge of these issues – apparently he has been studying them for at least 15 years at this time – is readily apparent. Overall the dry academic prose isn’t enough to take away from the history and strong analysis here, so it still rates as 5 stars.