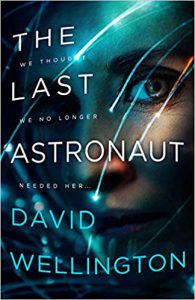 Story wise, this book takes the idea of “What if Oumuamua wasn’t just a mysterious space rock?” and spins a story from that premise. It is a story neither NASA nor SpaceX will be overly happy with, though the fictional version of SpaceX – in the book, a company named so similarly that I’m almost positive lawyers were involved to make it just different enough – bears the brunt of the book’s criticisms of both agencies. But overall, it is a story that works as both a pyschological horror movie and a creature feature, and Wellington’s ability to combine both of those generally disparate stylings is to be commended.

Structurally, the book bends toward its similarities with The Martian early on during the setup stages of the tale as it uses space jargon pretty heavily. Later it bends to more of its similarities with Vessel and the jargon drops off considerably. The book’s chapters aren’t numbered but instead are named for various events, and just looking at the table of contents gives the reader a rough idea of the arc of the story – though I can assure you, it doesn’t actually give away any of the meat of the story and indeed just the slightest hint of the bones. It uses a mockumentary style blending of both documentary and storytelling similar to the 2005 movie Supervolcano very well and… well, to say more about that would be to drift into spoiler territory.

Overall a solid book, very much recommended, and I’m looking forward to more from Mr. Wellington.

Neither NASA nor SpaceX will be overly happy with this one. This is another real-ish solar system space survival story in the vein of Andy Weir’s The Martian or Lisa A. Nichols’ Vessel. In terms of techno-jargon, it sits somewhere in between those two, with more jargon early in the book before the book takes a less technical turn towards the back half. Stylistically, this is a mockumentary type tale with both a storyline and documentary elements interwoven and uses various event names for the headings of the chapters rather than chapter numbers. Overall a solid effort and very much recommended. I’ll be looking for more from Mr. Wellington in the future, that’s for sure.