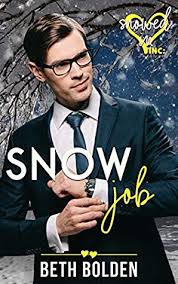 As I said in the intro, this is a solid MM romance. It has a decent enough overall plot of ex step-brothers who almost could not possibly be more different getting set up to be in the same place at the same time by their parents… and then getting trapped in that location for a couple of days via the mechanism of this iteration of the Valentine’s Inc marketing ploy: being snowed in. As far as Valentine’s Inc itself goes, this particular book only mentions them once, in passing. (Others in the series make a bigger deal of the organization.) Sometimes a hot, fast, and not overly angsty book is just what the doctor called for, and this certainly hits those notes.

Since I don’t think I’ve really discussed it in this blog, let me mention how brilliant I think the overall idea of Valentine’s Inc is. With this – as much a marketing collective as an actual book series – you get authors who generally write in the same genre (in this case, MM romance) with varying degrees of “fame” (some authors in any iteration of the collective are more well known than others) to come together and write books on their own but with some loosely connecting theme. This is at least the third time it has been done with this loose grouping within the past year, beginning last Valentine’s Day with the original Valentine’s Inc books, then late summer with Valentine’s Inc Cruises, and now Valentine’s Inc – Snowed In. (There is a fourth series, A Snow Globe Christmas, which worked a similar idea with at least some of the same authors, but I am unsure at this time if it was part of this same effort.) And it is a brilliant idea to pool marketing resources together and try to enhance everyone’s sales and fan bases while still allowing near total freedom to the author to write nearly anything they want. I’ve seen the idea replicated somewhat in similar arenas, such as with last summer’s Boys of Summer series, and particularly for established yet not necessarily as well known as they’d like authors, this seems like a solid way to work with authors in the same field to benefit all.

Overall I very much recommend this particular book, Snow Job by Beth Bolden, as well as both the general approach (for authors) and the actual series (for readers) discussed here. 🙂

Solid Sexy Romance. This book hits pretty well all the notes one expects in a MM romance – decent story, a fair amount of sex, etc – and even hits a couple of tropes that are more widely popular, such as second chance, (ex) step family, enemies to lovers, wild and adventuresome vs nerdy and … “locally oriented”. I believe this is my first from this author, and if this is indicative of her style it is a good one to have. I’ll likely be checking out more from her based on this tale. Very much recommended.