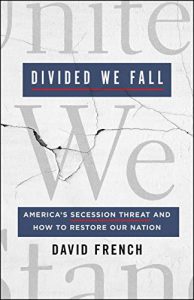 This week we’re looking at THE book every single American needs to read before they vote in the 2020 General Elections in a few weeks. This week, we’re looking at Divided We Fall by David French.

Note: In light of the events unfolding this weekend following the death of Supreme Court Justice Ruth Bader Ginsburg, I’m moving this post’s publication up by a couple of days and giving it that much longer at the top of the site and my socials. Yes, this is *that* important. Particularly now. -Jeff, 9/20/20

I’ve read some *extremely* disturbing books. Books with some of the most graphic, horrific acts any human can possibly imagine. Some of them have even been nonfiction.

And y’all, the scenarios French lays out at roughly the halfway mark – one from the left, one from the right – of how America as we know it could dissolve nearly instantaneously are at least as horrific as any of them. This is the clarion call that will hopefully snap people awake and get them to realize just how perilous the path we are on truly is. Particularly since these scenarios are truly so real that in theory either one of them could happen between when I write these words on July 4th, 2020 and when they publish – along with the book – on September 22, 2020.

He spends the front half of the book building to this point by showing, in crystal clarity, the stark realities of exactly where we have been and exactly where we are now. His analysis of history and current events seems solid to my mind, and it is only once he is finished showing exactly where we are – at least through the end of 2019 – that he unleashes his horrific master strokes.

French then spends the back third of the book in “this could happen – but it doesn’t have to” mode. Here, he expounds on really two primary points – which I’ll not spoil here – that would require a commitment from us all to actively work towards, but which could ultimately walk us back from the brink we currently find ourselves at. Neither of his points are nearly as readily achievable as the disaster scenarios, but both – particularly when working together – present arguably one of the best defenses against the disaster scenarios I’ve come across of late, and indeed actually play into my own “stop the pendulum” philosophy of the last decade.

Ultimately, if you are an American reading this, you need to stop reading this review and go read this book already!

As always, the Goodreads/ Bookbub review:

Americans, Read This Book. Now. Quite simply, I’ve yet to encounter a more important book for every American to read *immediately*, and *particularly* before you vote in the General Election this fall. French does a solid job detailing the stark realities of exactly where we are as a nation politically, and where we’ve been. He then dedicates just three chapters to some of the most disturbing things I’ve ever read, – and I’ve read books that would make even an Iraq War veteran like French puke his guts out in their explicit horror. In two of these three chapters, French presents two scenarios for a complete dissolution of the United States of America – one from the right, one from the left. And what makes these scenarios so disturbing? I’m writing this review on July 4th, 2020. The book actually publishes (so far at least) on September 22, 2020. *Either of these scenarios could plausibly happen in between me writing this review and most of you being able to read this book.* After presenting these scenarios in all their horror, French then spends the back third of the book detailing how we can prevent them from happening. While he ultimately only has two real recommendations – neither easy and arguably neither directly feasible in this moment, but both things we can commit to working towards – they are both things that could actually work, if indeed Americans want to save America. Very much recommended.