Better Title: On Fascism I Disagree With. In this text, MacWilliams does something I’ve literally never seen before, at least not this blatantly. He takes the concept of “prooftexting” from Christian nonfiction/ preaching, wherein the speaker (or writer) selectively quotes particular passages in “proof” of whatever point they are making, and uses the same technique using American History itself as his “inerrant” source. And as with all prooftexters, MacWilliams does indeed make a solid point here or there, but specifically in relation to the other St Martin’s Press title whose review spurred this one – Divided We Fall by David French – this book is but a pale comparison at best. To the level that if one can *only* read one of the two, go with French’s text over this one. Yes, it is longer, and yes, it still comes from a particular ideological background. But it is also *far* more balanced, nuanced, and I daresay insightful. Here, MacWilliams blatantly ignores virtually all authoritarianism from the left, including from current Presidential candidate Joseph R. Biden while consistently railing against that of the current President of the United States, Donald J Trump. He further has a very narrow definition of “democratic” and claims that anyone who doesn’t meet that definition for any reason whatsoever is “authoritarian”, seemingly completely unaware that Anarchists exist and fight “democracy” as nothing more than the iron fist of authoritarianism in the velvet glove of being benevolent to the chosen few.

Finally, in an irony that cannot be ignored by myself in particular – as I run a Facebook page called “He Didn’t F*cking Say That” – MacWilliams begins and ends the text referencing Benjamin Franklin’s “a republic, if you can keep it” line… which didn’t appear in the American lexicon until 1906 according to the Yale Book of Quotations, over a century after Franklin’s death. And yet despite this (or seemingly ignorant of the quote being apocryphal), MacWilliams seems to be unaware of his hypocrisy as he decries McCarthy’s butchering of some of Lincoln’s lines during his own quest for power.

On the whole, this was an interesting and at least quick read. But if one is looking for a complete – or even moderately adequate – takedown of fascism and an exploration of its history in America, sadly this is not such a text. Recommended if only for the few salient points it does make and its brevity.

This review of On Fascism by Matthew C MacWiliams was originally written on September 2, 2020.

DJT == AOC. Yes, that is actually a point Seargeant makes in this book – and no, it isn’t for the reasons some of my fellow Libertarians/ Anarchists like to point out. (Which are accurate in their own way, but I digress.) No, here the point Seargeant makes is that both of these seemingly diametrically opposed candidates have actually embraced the same narrative archetype to tell their stories. Overall, the book is an excellent examination of just how storytelling – and in particular, a few of the classic archetypal stories/ heroic journeys – has completely reshaped at least American and British politics of the last few years. Reason seemingly no longer matters so much as narrative, so it is important to know these narratives, how they are structured, and how these structures play into political messaging in order to more effectively play both offense and defense in the political arena. Masterful work that makes a few missteps here and there when it deviates from its central premise at times, and thus the reduction of one star. Still much recommended.

This review of The Art of Political Storytelling by Phillip Seargeant was originally written on May 14, 2020.

Interesting and Applicable. This is a truly remarkable work that traces the sociological and biological impetuses for and restrictions on migration at levels from the individual through the species. Shah does a superb job of combining history and science to make her case, and even impeaches at least a few organizations currently in the headlines along the way – even while clearly having no way of knowing that she was doing so, as the book was written before they became so prominent more recently. Spanning from the guy that developed the modern taxonomic system through late breaking issues with the Trump Presidency, Shah shows a true depth to her research and builds a largely compelling case. Very much recommended.

This review of The Next Great Migration by Sonia Shah was originally written on April 10, 2020.

Mostly Memoir. Part Treatise. Some Genuflecting. The biggest thing to know about this book is that it is mostly memoir of Glenn Jacobs’ life *pre* becoming Mayor of Knox County, TN. Indeed, the longest chapters and the most chapters overall deal specifically with his 20+ years working for Vincent Kennedy McMahon in World Wrestling Federation/Entertainment. Which is where at least part of the genuflecting comes in – his praise of Vince… well, Kane has been known to employ less smoke than Jacobs blows when speaking of McMahon. (And don’t get me wrong, I’m one of the fans that generally thinks McMahon has truly been one of the smarter men in sports entertainment over the last 30+ years, largely for the reasons Jacobs elaborates on quite a bit.)

The next largest part of the book is Jacobs’ mostly general political philosophy with a few specifics. Here, Jacobs actually makes a very strong case for libertarianism and those that find themselves agreeing with his thoughts here should look into a newly announced (at the time of writing this review) Presidential candidate John Monds, the first Libertarian ever to earn more than 1 million votes. However, this is also where more of the genuflecting comes in, as Jacobs devotes a fair amount of time to praising the current occupant of the White House. If you like that person, you’ll like what he says here. If you don’t, know that this is a small section of the book overall, but coming near the end leaves a bit of a bitter taste in the mind of that type of reader.

Ultimately primarily sports entertainment memoir, this is one of the better written ones I’ve come across, and I’ve read several from over half a dozen of Jacobs’ contemporaries and even a few legends. Very much recommended.

This review of Mayor Kane by Glenn Jacobs was originally written on February 13, 2020. 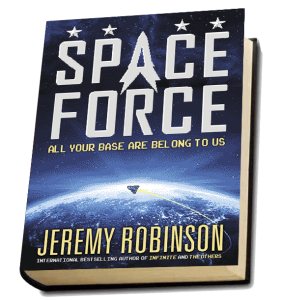 The book itself is classic Robinson as far as the science fiction itself goes – alien invasion, Earth forces have to stop it. But it is the way Robinson crafts this particular tale that makes it stand out above even his own amazing books. The pop culture (and specifically geek/ gaming culture) references abound arguably more than in even Ready Player One – you seriously seemingly can’t go more than a paragraph or two without some reference. And they all work well in the story he is telling with the tone he is telling it in. Specifically, a very irreverent, literally laugh out loud comedy that happens to have a solid science fiction backing. In some ways, it is reminiscent of the 2015 Adam Sandler movie Pixels as far as the mix of science fiction, gaming, and comedy goes, but Robinson is far superior on his execution and more modern on his gaming, using some of the latest and biggest trends in gaming -battle royale games ala PUBG and Fortnite – as one of the primary plot points of the book. 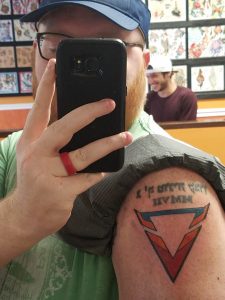 Coming from a man that is written into one of Robinson’s other books (HUNGER) and literally has a tattoo featured in another Robinson book (UNITY, see over there ->) on his arm, this is arguably one of my favorite Robinson books to date because while his other books have been fun, they have always had a very serious undertone. This book is basically pure fun, even while the characters and indeed, Earth itself, are in mortal peril. Robinson shows that he is equally as gifted at creating pure light-hearted escapism as he is at crafting solid science fiction heart wrenching drama, but these days I find myself preferring the more light hearted side of things, and thus this book is very welcome.

So help me out here. I’m going to read Robinson’s books regardless, because I absolutely consider him the Modern Day Master of Science Fiction. But I would REALLY love to see more of these pure fun, light hearted books from him – but he is absolutely sales driven. So I really need this book to sell better than his others, preferably *all* of his others. That way he’ll be convinced to write more of this style of book, and we can all laugh a little more.

And really, given all that is happening in the world right now, we could all use a little more laughter.

So go buy this book!

As always, the Goodreads/ Amazon reviews:

The Master Of Science Fiction Adds Humor! Jeremy Robinson, the modern day Master of Science Fiction, has now added even more to his stories: literal laugh out loud, and very nearly literally roll on the floor laughing, level humor to a science fiction adventure that is just as breathtaking as his other books.

So stop reading this review and go buy this book and start reading it instead already! President Kanye West demands it!