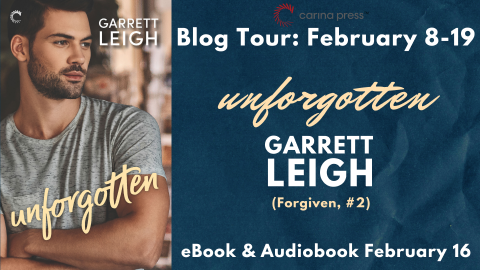 And Now, Part 2. In the second part of this courageous series of romance books, Leigh goes from MF romance in Book 1 (Forgiven) to MM romance here, a genre she is apparently much more well known in. And given the vitriol for MF romance in so much of the MM world, I expect this book to be received better than the first book was – and at this moment, the early Goodreads reviews are at least trending slightly in that direction.

Here, we get the full-on romance of two characters first introduced in Forgiven – the brothers of both of that book’s leads. And it is again a fairly standard gay/ bi romance. Fairly high degree of angst, lots of issues for both men to work through, sex scenes later in the tale given the inexperience of one of them, etc. If you like MM romance generally, this one will be another solid one for you. If you’re just exploring the genre, this is a good one to try out – and maybe even read Forgiven first, if you’re more comfortable in the MF romance space.

While I don’t see where this series goes from here, if indeed it is to continue, I’m not opposed to coming back to this world. Leigh does a truly solid job of establishing it and allowing her characters to live mostly real lives within it, including the added tag of drama near the end of this one – which can happen to most anyone. Very much recommended.

Below the jump, we get a little over a page from – IIRC – Chapter 1 as an excerpt, followed by the book information provided by the publisher. 🙂
END_OF_DOCUMENT_TOKEN_TO_BE_REPLACED