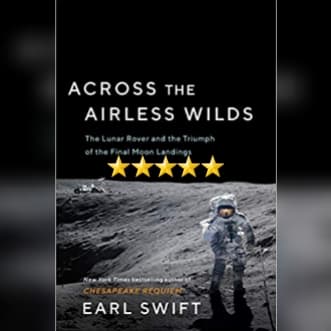 Astounding History Of An Oft-Forgotten Era. One point Swift makes in this text is clear even in my own experience – *even as someone who has been to the NASA Cape Canaveral Visitor Center many times*: The era of Apollo after 11 and in particular after 13 is often forgotten in the zeitgeist. People talk about Armstrong and Aldrin all the time. People even talk about Lovell and Mattingly in Apollo 13 a fair amount (helped somewhat by the excellent and mostly realistic Tom Hanks movie and the fact that to this day, NASA sells quite a bit of “Failure Is Not An Option” merchandise).

But after that particular era is when the “real” lunar science began. And for that, NASA needed another tool that got a fair amount of (slightly inaccurate) press back in the day, but whose story has never been quite so thoroughly documented as this particular effort by Swift. That tool was the lunar rover, aka the “moon buggy”, and here Swift does an extremely thorough job of documenting the first inklings of an idea that it may be possible through the early history of American rocketry (while not hiding one iota from its roots in Nazi experimentation) through the conceptualization and manufacturing of the actual rover and even into its impacts on modern rover design, such as the newest Mars rover, Perseverance.

The book does get in the weeds a bit with the technical designs and what exactly went into each, along with the various conceptual and manufacturing challenges of each. Similar to how Tom Clancy was also known to get so in the weeds about certain particulars from time to time, so Swift is in good company there.

But ultimately, this is an extremely well researched and documented book that does a simply amazing job of really putting you right there as all of these events unfold, all the way to feeling the very dirt and grit the final men to walk on the moon experienced when they had certain cosmetic failures on the buggy… millions of miles away from being able to really do anything about it. Truly an excellent work that anyone remotely interested in humanity’s efforts to reach outside of our own atmosphere should read. Very much recommended.

This review of Across The Airless Wilds by Earl Swift was originally written on April 11, 2021.

Interesting Angle I Had Never Considered. This book takes a topic that many around the world, and particularly many Americans, know about and presents an angle on it that few openly consider. So many talk about the amazing scientific accomplishments of the Apollo program and NASA at the height of its prowess in its earliest days, but here Muir-Harmony explores the dimension of *how* did so many around the world know of this and *why* did the know of this. Muir-Harmony makes the case reasonably well from a *political* side that from the beginning, NASA’s actual chief mission wasn’t specifically science-for-the-sake-of-science, but much more closely science-as-covert-imperial-tool. NASA was tasked with achieving remarkable scientific feats, but it was only when the political pressures to be the “peaceful” face of Democracy And Western Ideals came to bear that the funding and urgency were truly put in place to make the “race to the moon” a thing… even as it never really was a thing, since the Soviet tech for such missions was… lacking. Still, an utterly fascinating history that puts well known events in a new light, and that alone makes this truly a worthy read. Very much recommended.

This review of Operation Moonglow by Dr. Teasel Muir-Harmony was originally written on August 22, 2020.

Fascinating. This book is a fascinating tale of Gene Kranz’s early years at NASA, where he rose from being one of the initial Flight Controllers for the first Mercury missions to being the Lead Flight Director for both the first Lunar landing and the Apollo 13 explosion. The story ends after the Apollo program is scrapped, and the book then introduces its singular MASSIVE flaw, that resulted in me docking it a star. In the final chapter, Kranz takes himself from the hero just doing his job of his experience with Apollo to the bitter old man who just retired 20 years later when he is writing this book and making “recommendations” about the state of NASA during the 90s. His critique of the early days of the International Space Station in particular sounds particularly hollow nearly 20 years later, while former ISS Commander Scott Kelly is still being studied after his Year In Space mission (which contrasts nicely against some of Kranz’s early missions of putting Alan Shepherd in space for just 15 minutes). Overall a great book, just ignore the last chapter to have a happier experience.

This review of Failure Is Not an Option by Gene Kranz was originally published on May 13, 2018.