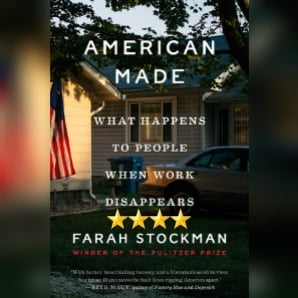 Strong Case Studies Marred By Author’s Biases. Overall, this is a strong case study following three people the author somewhat randomly stumbled into when tasked with reporting on the closure of a particular factory and its implications on the 2016 and 2020 elections. The author openly admits in the very first chapter that she is a fairly typical New England Liberal Elite, and that flavors much of her commentary and several of her observations – but also provides for at least a few hints of potential growth along the way. But once her own biases are accounted for, this truly is a strong look at a deep dive into the three people she chronicles and their histories and thoughts as they navigate both their personal situations over these few years and the national situations as they see and understand them. At times funny but far more often tragic, this is a very real look at what at least some go through when their factory job closes around them, to be moved elsewhere. (Full disclosure, my own father living through this *twice* in my teens in as Goodyear shut down their plants in Cartersville, GA has defined my own story almost as much as a few other situations not relevant to this book. So I have my own thoughts on the matter as someone whose family underwent similar situations a couple of decades before the events of this book, but who saw them as the child of the adult worker rather than as the adult workers chronicled here.)

Ultimately, your mileage on this will vary based on whether you can at minimum accept the author’s biases for what they are or even if you outright fully agree with them. But I *do* appreciate the flashes of growth she shows, particularly in later sections, as she learns just how fully human these people are, even as her prejudices early in the book somewhat openly show that she didn’t fully appreciate just how fully human people like this could be before actually spending considerable time with them. Indeed, the one outright flaw here is that there is at least a hint of impropriety when the author begins engaging perhaps a bit too much with the lives of her subjects – but again, that ultimately comes down to just how sensitive your own ethical meter is.

Overall a mostly strong book, and very much recommended.

This review of American Made by Farah Stockman was originally written on August 31, 2021.