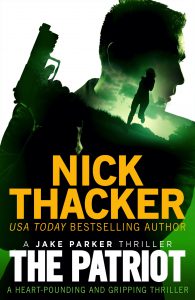 Excellent Story With Explosive Ending. So some people of late have decried reviews that even mention anything at all about the ending. If you’re such a person, stop right here. I’m not going to give away any spoilers- not my style at all – but that ending deserves a mention: It sets up what could be one HELL of a book 3.

Beyond that though, this book does an *excellent* job of showing the dichotomies of life on Puerto Rico and the nearly-as-divisive-as-mainland-US-politics issue of whether PR should be granted Statehood, maintain the status quo, or become an independent nation. Even while the main thrust of the actual action and mystery actually revolves around Big Pharma, how they are treating the citizens of PR, and terrorism. Indeed, we pick up not far after the ending of the first book, which was explosive in its own right and which set in motion the events here, at least as far as Parker’s involvement in them.

Truly an excellent mystery with plenty of action in a cool tropical setting (and with the requisite hot, mysterious woman), I’ll have a bit more to say about my own story that actually blends well with the overall story here when I participate in the publisher’s Blog Tour on my blog (BookAnon.com) on release day. So you might want to check that out – I even have a picture to share. 😉

Obviously, I can’t wait for Book 3 – even if it is a possible finale, it should be an epic one. Very much recommended, both this book and the series.

And while you really should go buy the book already, here’s my confession, the story I promised in the review 🙂 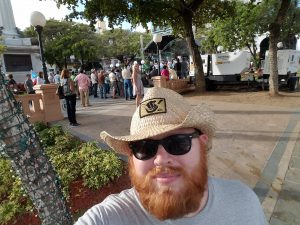 The date is Martin Luther King Jr Day 2017 – so Monday, January 16, 2017. Just four days before Donald Trump would be inaugurated as the 45th President of the United States of America. I am on a cruise aboard the Carnival Sunshine out of Port Canaveral with my wife – a fellow experienced cruiser who actually got me into cruising – and three friends, none of whom have been on a cruise before. On this day, we’ve stopped in San Juan – a port I’d stopped in once before and loved, particularly for its two centuries old forts. We’d just been at one of the forts – Castillo del San Cristobal – when we walk through the plaza right outside of it – the very plaza you see in the picture to the side here. Apparently it is a popular political demonstration spot, being just blocks away from the Capitol Building there. And that particular day, it was indeed hosting a political rally. As we walked by, all we could tell was that it was very obviously a lot of Puerto Ricans – there were numerous PR flags all over the plaza – and we were obviously… not Puerto Rican. The crowd sounded agitated, the speaker was very enthusiastic… so I made it a point to guide my group swiftly along the edges and away from this crowd. We wound up walking down a street of shops nearby, one I had been on in my previous trip. We went into one store, and when we asked the shopkeeper what was going on up the street, he went into a very passionate diatribe about it being a Puerto Rican Independence rally and that Puerto Rico should be free of the mainland US. So we quickly left his shop as well, and when we went across the street to another shop had a much more pleasant experience. Showing me that day the very dichotomies Thacker brings to life to well in The Patriot, just how very divisive the issue of Independence continues to be in Puerto Rico. Personally, I don’t have a position on the exact issue of Puerto Rican Independence, but I *do* believe it is time for the US to give up the “territory” system. Either grant every “territory” its full independence (even if under a Commonwealth type system such as the British have where the nations are independent officially, yet closely linked economically) or bring them in as full States of the United States of America. Even there, I don’t have a real preference, I just believe an action of one of those two types needs to be made.

But enough about my confessions. Seriously. Go buy the book already!

Oh, and here’s a blog tour poster that Bookouture (the publisher) provided. 🙂 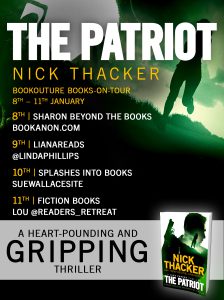 More Police Procedural Than Apocalyptic. This was a strong book in a police procedural vein that opened up the possibility of looking at a more apocalyptic scenario. If you go into this one expecting a truer Apocalypse threat ala Brett Battles’ PROJECT EDEN or Michael Laurence’s EXTINCTION AGENDA series… you’re going to be disappointed. But if you’re looking for a more police/ detective story that happens to include *elements* of Apocalyptic threat, you’ve found an *amazing* book that is *exactly* what you’re looking for. This was my first from this author, and will not be my last. I’m truly looking forward to the next Jack Parker book at minimum. 🙂 Very much recommended.

This review of Containment by Nick Thacker was originally written on September 1, 2020.