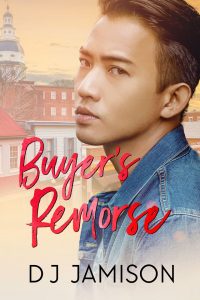 This week, we’re checking in on the real estate market in Fields, Kansas, specifically as it relates to commercial real estate suitable for a new deli. This week, we feature Buyer’s Remorse by DJ Jamison.

This book is the second in Jamison’s “Real Estate Relations” series and features leads who were secondary characters in the first book, Full Disclosure. In Full Disclosure, we meet Lee when he has to flee into an even more secretive form of witness protection after he is nearly killed thanks to a mole inside the US Marshall’s Service. He flees to Fields, Kansas with his guard, Reid, and they go undercover as boyfriends. Complicating this is that Reid begins to develop feelings for his new real estate agent, Camden… who happens to be best friends with fellow real estate agent Miguel.

In the beginning of Buyer’s Remorse, three years have passed since the events of Full Disclosure, and Lee is coming back to Fields of his own volition in an attempt to finally leave his past fully in his past. He brings his mom and sister along with him, and together the three of them intend to start a new deli. Complicating matters are Lee’s feelings for Miguel… and the fact that they find a dead body in the first building Miguel shows Lee.

This is an excellent second chance romance, one that really does a good job of exploring just how far a person will go to get forgiveness and move on from their mistakes. The mystery is better built, with even more perilous stakes for the couple than the first book – it seems that Miguel and Lee are constantly in danger of arrest, while Reid and Camden never really felt like they were in danger until the moment they were. The romance also struck me as more realistic in this book.

One thing I will note, in case it isn’t obvious: Yes, Lee and Miguel (and Reid and Camden) are both men, and yes, this is a romance book that largely adheres to the trappings of its genre. Meaning that yes, there is M/M sex in this book. If that is something that you can’t handle for whatever reason, just skip this book.

That said, this book is a very solid romance, and Jamison really set the stage to go in at least a couple of different directions with the next book in the series – one of which would be very intriguing indeed. Do yourself a favor and pick it up.

As always, the Amazon/ Goodreads and Youtube reviews are after the jump.
END_OF_DOCUMENT_TOKEN_TO_BE_REPLACED