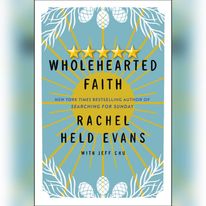 A Return, But With Growth. This is one of the harder reviews I’ve ever written. Not because the book wasn’t amazing – this was easily Evans’ strongest book since Searching for Sunday, and thus the book that I’d always hoped she would be able to write again. But because of how it came about, and, perhaps, how it came to be in such strong form. Evans’ sudden illness and then death in the Spring of 2019 shocked any who had ever heard of her, and in fact on the day of her funeral I read Faith Unraveled as my own private funeral for this woman that had given voice to so many of my own thoughts in Searching For Sunday, thus gaining a fan, and yet who in subsequent books had strayed so far afield that even as a member of her “street team” for the last book she published before her death, Inspired, I couldn’t give it the glowing review expected of such members, and so felt I had to leave the group. This was something I actually discussed with both Evans and the PA that was leading the team, and neither one of them in any way suggested it – yet my own honor had demanded it.

With this book, finished from an unfinished manuscript by her friend Jeff Chu and clearly still in the research and pondering phases when Evans was suddenly cut from this reality, the commitments to her progressive ideals that ultimately derailed so much of Inspired still shine through, but the more humble, the more questioning nature of Searching For Sunday form much more of the substance of the book. Thus, for me, this book is truly both the best and the fullest representation of the Evans that I knew only through reading her books and occasionally speaking with her as a member of that street team. I’ve never read anything from Chu, so I don’t know his voice as an author, but there is truly nothing here that doesn’t sound as though Held herself wrote it – which actually speaks to just how much care Chu put into his own contributions, as there is truly no way to pull such seamlessness off without intense concentration and care.

I was tortured in writing my review of Inspired because Evans *was* someone I looked up to after Searching For Sunday. She was a contemporary, along with Jonathan Merritt, who grew up in a similar region and culture as I did and thus with whom I was able to identify so many similar experiences in similar times and places. (To be clear, if any of the three of us were ever in the same place – even the same evangelical Christian teen megaconference – at the same time growing up, I never knew of it.) And I am tortured now both because I of what I had to write in that review to maintain my sought-after as-close-to-objective-as-I-can-be standard of reviewing and because of what this particular book means in the face of her death over two years ago. But I do find solace in that even knowing all of this is going on in my head writing this review, there was truly nothing here that I could and would normally strike as objectively bad. There weren’t any claims of an absolute here – this went back to the more questioning and searching nature of Searching For Sunday rather than the more near-polemic nature of Inspired. There wasn’t even any real proof texting going on here – which is particularly great since it was Evans herself (along with some others) who actually started that particular war I wage every time I see the practice in a book. The writing was as beautiful as anything Evans has ever produced, and while the bibliography in this Advanced Review Copy was a bit scant at just 9% of the text, this also was a much more memoir-based book (yet again: more in the vein of Searching For Sunday) and thus scant bibliography is easily explained by specific genre.

And thus I feel that the 5* rating is objectively warranted, at least by my own standards, even as I fully understand that it could come across to some as any level of death-bias.

If this is truly the last book that will ever bear Rachel Held Evans’ name, I personally couldn’t have asked for a better one to be her finale. This is truly going out as strong as she possibly could, and thus it is absolutely very much recommended.