Recently, I wrote about the divergent financial realities of readers and authors. In that post, I called out readers who return books for refunds, as those refunds come directly out of the authors’ paychecks.

Did you know, if your readers have purchased your title within the last seven (7) days, that ‘Permanently Delete’ button in the iOS app DOES NOT DO WHAT IT SAYS IT DOES? No if a reader has purchased your title within that window, this button also INITAITES A FULL RETURN. 😳 The cherry on top? The Kindle iOS app – you know the one with 3.6 MILLION user downloads on Apple alone – offers your readers ZERO alternative within the app to remove the title from their library without registering as a full refund, and of course a negative profit on your back end, if they are within that seven (7) day window. I also checked this on my account from my repurchase, which I marked as read, and it does the same thing for FULLY CONSUMED CONTENT.

Heinritz then goes into further detail that *after* that initial 7 day window, the “Permanently Delete” option works as most of us would expect – it simply removes the book from your Kindle Cloud entirely *without* initiating a refund.

While Heinritz’s commentary is apparently exclusively about the iOS Kindle app, I personally tested the charge against Amazon’s own Kindle App on the most recently available Kindle Fire 10… with identical results, as seen here: 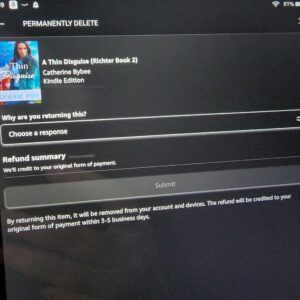 So what can readers do?

First, you need to understand very clearly that this is happening. As of this writing, if you use the “Permanently Delete” option on a book on your Kindle / Kindle App within the first seven days after purchase, Amazon is initiating a full refund, and that refund ultimately comes not from Amazon, but from the Author’s royalties for that book (as we’ll see momentarily).

I personally recommend never using the “Permanently Delete” option to begin with. “Remove Download” will instead remove the book from your device… but keep it in your library. Maybe you’ll want to come back to it someday. More importantly for the purposes of this commentary, Remove Download will not initiate a return of the book. Ever. At least as the apps currently work as of this writing.

If you *must* use “Permanently Delete”… wait a month or so first. Please. Because if you use that option within the first 7 days, the net effect of this return is actually a *negative* balance for the author, as detailed in this twitter thread in particular from Quenby Olson that has gone viral over the last 18 hours or so as of this writing.

And hey, maybe if we as a book community put pressure on Amazon to address this, they might actually do so? While I am a professional software engineer as my day job and I *suspect* this shouldn’t be an overly hard fix, I’ve never worked for Amazon and can’t say definitively how much effort would be required on their end to fix this issue. But I can say without hesitation as a reader that, to me, it seems like the right thing to do, and that the current practice seems shady to me. (To be clear, without making any actual legal claims regarding whether or not this actually constitutes any breach of any legislative or regulatory act. I am simply noting from a commonsense perspective that in my personal opinion, this is wrong and needs to be fixed.)

What say you, readers? 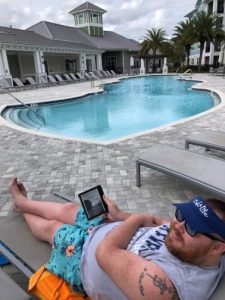 Moments ago, I wrote the Featured New Release of the Week post for this week, which features Perfectly Good Crime by Dete Meserve. I spent a large part of this review speaking about something that was the thing about this book that primarily resonated with me and intrigued me about this book, yet I felt it was a spoiler to reveal it. Other reviews have since already spoiled this particular topic, but even now I feel the need to hide the rest of this commentary behind a Continue Reading tag, so if you are reading beyond this point,

READER BEWARE: I CONSIDER THE BELOW DISCUSSION TO CONTAIN SPOILERS TO THIS BOOK!
END_OF_DOCUMENT_TOKEN_TO_BE_REPLACED

Last month, I wrote about a troubling trend I’ve been made aware of recently among Advance Reader Copy (ARC) readers. Continuing discussions around ARCs, mostly with fellow ARC readers this time, has revealed another troubling topic.

Specifically, the question has come up in multiple discussions on different walls and groups regarding what to do with ARC copies once you are done with them and in particular whether it is acceptable to share them.

The very first time an author gave me a book – I don’t even remember if it was an actual ARC or not – was several years ago now. I had been reading this author for several years already and had interacted online with them for at least a few of them, and had been absolutely devouring a particular series. But I was unexpectedly let go from my job – just a couple of weeks before the new book in the series came out. This author was kind enough to send me a copy of the book at their own expense, even the shipping. But they specifically told me that I was to never give the book to anyone else.

Over the years, I would become more active with more ARC work for more authors, and at least for me it was always understood implicitly that these ARCs were never to be shared without explicit permission from the person who gave them to me. It honestly got to the level that I just assumed everyone understood this, particularly anyone who accepts ARCs.

But these recent discussions have revealed that many people do not know, either from not being told, not thinking about it, or actively avoiding finding out. Some think that it is acceptable to give the books to just a single other person. Others think it is acceptable to donate the ARC to a library, be it public or church. Still others go so far as to think it is ok to actively sell these ARCs to used bookstores.

Dear reader, let me be explicitly clear: To my understanding of the implicit contract of accepting an ARC, you have exactly two duties:

To violate either of these two basic rules is, to put it bluntly, theft.

I dealt with the first case in the post last month.

In the case of the second rule, you are stealing from them via denying them the sale that would occur if whoever you give the book to were forced to instead buy it from the author. That is a bit more concrete case of theft than the first – no longer are we talking theoretical sales, now we have discrete persons to point to. *That* person would have been a sale had you not given the book away without permission.

But Jeff, what about second hand sales? Don’t I have a right to sell any book I have? NO! In at least some countries (including the US, where I am based), you do in fact have a right to sell any book *that you purchase* to anyone you so choose, via yard sale, giving it to a library, selling it to a used bookstore, or anywhere else. To my knowledge, the legislative acts that permit this – and there are pros and cons to even this system – do NOT cover ARCs. But I could potentially be wrong on that point, in which case I hope a lawyer familiar with literary legal issues will chime in at some point. HOWEVER, even if it is “legal” under the legislative acts, that does NOT make it ethically correct, and in that sense “theft” is a correct term regardless of specific legislative acts.

But now let us turn to what can be done about this phenomenon?

For one, I think we can have these conversations where we illuminate what is happening and why it is wrong.

For two, I think authors can be explicit when giving ARCs, even if just the first time. Such as this statement that was on the signup form for an ARC group I applied for just this morning:

And maybe we can re-iterate these points from time to time in ARC oriented groups, just as many corporations have ongoing training for employees just to remind them of things they already know.

These issues have been shocking to me to discover – maybe I’m just too much of a goody two shoes at times. But by working together, we, the people of the written word, can work to put an end to them.

And no matter what, always remember:

Never give away an ARC without explicit permission to do so from the publishing agent.