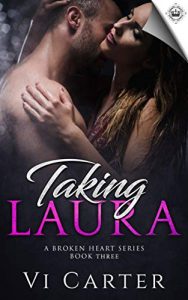 In this episode of the Broken Hearts series, recurring character Craig has been broken for a while, but even moreso by his actions at the end of the previous book. New character Laura is just as broken, and together, they just might find a way to heal each other to some degree. For a book that takes entirely inside a mental health facility yet without any form of paranormal or fantasy elements, this book is surprisingly well paced and non-claustrophobic. Carter has done a remarkable job with making sure we know just how broken one character is – and then hitting us unexpectedly with just how broken another character is.

This is a solid conclusion to this series, as there are no apparent openings for new couples to continue the saga, and quite possibly the most impactful for certain readers due to its ultimate subject matter. Truly looking forward to where Carter’s mind goes next and what stories she crafts from here.

Tying Up Loose Ends. With this book, we get a conclusion of sorts to this trilogy, with no clear avenues to continue a series from here. While one might think that a book that takes place entirely inside a psychiatric hospital would go the paranormal/ scifi route or be fairly boring, but this book is neither. Instead, it is the same broken romance readers have come to expect in this trilogy, with even more impact for some readers than previous books due to the nature of this female lead’s brokenness. With that said, this particular reader figured out the “big reveal” roughly 25% of the way into this book, while it wasn’t officially revealed until the last quarter of the book. Still a worthy read, and a great conclusion to this series.