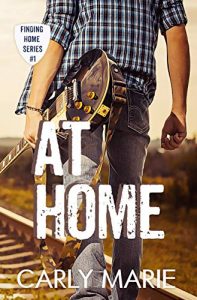 This book overall is a solid romance between two guys roughly a decade apart in age (with the younger one being mid 20s) who happen to meet by chance. What follows is a moving romance wherein each tries to adjust to the other’s life while also exploring a particular kink that both have considered or actively participated in for several years. It is this particular kink – age play and specifically infantilism, including open discussion of whether the “boy” should wear a diaper – that ventures into “oh hell no” territory for this reader, but it works well within the story and Marie does a great job of humanizing those who enjoy this particular kink that many, perhaps most, would have the same reaction as this reader over. And it is for that reason above all others that this book is a very worthy read. It is a strong romance outside of those elements, but in its efforts to show that even those with kinks deemed particularly strange by mainstream society, it truly shines. Very much looking to see what Marie writes from here.

Solid Romance. As a romance, this book works well in telling the story of the chance encounter between an emerging country music star and a Sheriff. The characters all feel real, and there are at least a couple of different couples to look toward to continue the series – and the author reveals which one is next in the notes at the end. The sex is, as is often expected in this genre, definitely NC-17 rated – and kinky, including quite a bit that is in the “oh hell no” category for this reader, but the book presents an interesting look at the personalities of those who enjoy it, and for that reason alone is a worthy read, even absent other factors. The book even presents a solid look at a people – small town and/ or country music fans – that normally barely even qualify as caricatures in LGBT oriented books, and that alone was refreshing and thus also a worthy reason to read. Again, these last two reasons are *in addition to* it being a solid romance to begin with, and serve to strengthen an already solid book and make the… less personally palatable… sections easier to handle.