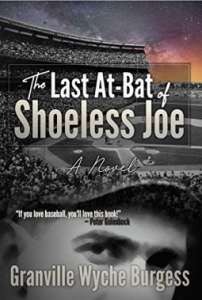 This book was a phenomenal tale that captures the old – and currently resurging – Southern mill life pretty well perfectly. And it also captures the desires of some of its children – sons in particular – to do anything possible to leave it behind them once and for all. Having grown up after the mill era busted yet in an era when it was still lingering, this reader can personally attest to the accuracy of the setting, both from personal memory and from growing up around those who lived, laughed, worked, and loved during the heyday of the southern american textile mill. Even the secondary story of the young lady coming down from the mountains to find better money in the mills is spot on to the era and even life in the region to this day.

But for all its spot-on perfection in showing the southern mill life, this book is a baseball book through and through, and it is within baseball that the book truly shines brightest. The story pits a young talented up and comer who works hard at perfecting his baseball skills against the owner of the local mill who is pursuing a championship at any cost, and both characters work very well. However, it is the inclusion of the titular Shoeless Joe Jackson of the infamous Black Sox scandal that rocked the sport a century ago this very year that gives the story is emotional and narrative heft. At this point in his life, the greatest natural hitter ever to grace a baseball diamond has consigned himself to a life apart from the sport he still loves, living in obscurity in his hometown as a liquor store owner. At least until our young up and comer comes to him and begs him to help train him to be a better baseball player. After some shenanigans from the villain, Joe is convinced to not only train our youngster but to become the manager of the team. This leads to the inevitable comeback ala the Atlanta Braves’ own Worst to First season, and like that very season the championship game comes down to the villain’s team vs the team now managed by Shoeless Joe.

It is during this stretch of the book that we get a phenomenal look at the Black Sox scandal itself, apparently based on original research done by the author and told via Joe reminiscing and revealing secrets at critical times – and withholding others almost until it is too late.

Ultimately, the championship game in particular shines and we get our titular moment – the last at-bat of Shoeless Joe Jackson, the greatest natural hitter in the history of baseball. And it is truly spectacular and worthy of being the title of the book.

Even if you have no interest in baseball or southern mill life in the last years of Jim Crow, you owe it to yourself to read this book, easily among the best I’ve read this year and quite possibly likely to remain a Top 5 book on the year no matter how many more I read.

Great Story of Baseball and Life. In this tale the author picks up on a hometown hero who died just as the author was beginning to play baseball himself, but whom he never heard of until many years later. The author uses a combination of real and fiction to paint a stunning portrait of a man, a place, a time, and a sport. I read this book on Major League Baseball’s Opening Weekend 2019, and this fall at the World Series will be the century mark of the infamous Black Sox scandal that saw “Shoeless” Joe Jackson banned from the sport he loved for the rest of his life. The story picks up in the final year of Joe’s real life, when he is living in relative anonymity many years after the scandal and indeed after years of depression and war that largely allowed Joe to fade into history. But here we find a young boy with a talent for baseball stuck in the morass of textile mill life in the post-War period in the South. The villain, played by son of a carpetbagger who resents the life he has been dealt and has dreams of returning to both baseball and the North, is written superbly. This book is so richly textured that it resembles some of the complex fabrics coming out of the region at the time, with some scenes reminiscent of the sweeping shots used in some major movies now. Simply an outstanding book about a truly phenomenal man, and one that left this reader in tears. If you’re a fan of baseball at all, read this book – it is at least as good as any baseball movie ever, including Field of Dreams. If you want to have a better idea of what life was like in Jim Crowe South, read this book – it has a great depiction of that too. If you just want a solid story of hope, forgiveness, and love – of people, life, and the game – read this book. You won’t be disappointed.