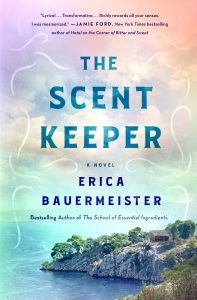 With this post, we’re looking at a book that marks the first time I’ve ever been invited to be a part of a blog tour. The book featured in this tour is The Scent Keeper by Erica Bauermeister, and in general it starts out feeling like The Giver… and then becomes more than even that award winning best selling book ever dreamed of. As of this post, it releases in just under a week on May 21, 2019 – and is available for preorder, which I very much recommend.

Here’s my Goodreads/ Amazon review of the book, to give an idea of my own thoughts:

Observe the World. Unlock the World. This book starts out feeling like The Giver – and considering how long-beloved that book is, that isn’t necessarily a bad thing. But then it morphs into a tale of a young woman finding herself and becomes so much… more. Truly a spectacular work that ends on the same kind of note as another highly successful pop culture phenomenon – Avatar. Amazing work, very much recommended.

And below the jump we feature the excerpt that this blog tour allowed me to publish here. This particular scene is deep into the book – in the 80% done range – but doesn’t feature any major spoilers (just a minor if somewhat expected one). So consider this a SPOILER WARNING for any who are particularly sensitive to even the most minute of spoilers. I specifically chose this selection because it contains my singular favorite line of the entire book – which I’ll bold – and specifically asked for this exact snippet of the chapter to avoid more significant spoilers. (One interesting note: The chapters of this book are not numbered. They are named. This particular one is called “Cocktails”.)

AND NOW, AN EXCERPT FROM THE SCENT KEEPER BY ERICA BAUERMEISTER:

Over the next few hours, the place filled until the crowd at the bar was three deep. Izzy came to help Fisher, bottles flashing, beer taps flipping up and down. At one point a middle-aged woman pushed her way through the crush of customers until she was standing right next to my stool. She wore a sweatshirt with a pirate on it, and white tennis shoes. A tourist— although how she had ended up at this bar was hard to fathom.

“When am I gonna get a drink?” she complained. Her voice had all the grace of a power saw, and I saw Fisher’s shoulders tighten.

“In a minute,” he said, raising a bottle of scotch and pouring a shot from twelve inches up.

“I’ve been here for twenty minutes and I haven’t even gotten to order.” She said it loud enough to carry over the rest of the bar noise. “This is bullshit.”

The room quieted. Fisher’s face reddened; I could feel the heat starting in him. At the other end of the bar, Izzy glared in our direction and dumped ice in a margarita glass.
Fisher turned and faced the angry woman, automatically scanning her expression, her posture, reading her the way the best fishermen do the water. Reading her the way he did everyone, everything.

Ever since we were both young children, I thought, our parents had taught us—whether intentionally or not—to observe the world around us, down to the minutest detail. We had learned, knowing with the instinct of children that it meant our survival. We had both developed skills that few could match.

Since coming to the city, however, we’d used those skills differently— to predict weakness, to win. It brought out the worst in us, as well as those around us. It was time to alter that equation.

“He can guess your drink,” I said to the woman in the sweatshirt. I could feel the energy in the room crack open in curiosity.

“If you don’t like it, you don’t have to pay.” Fisher shot me a look; I gave him an apologetic shrug, but the woman leaned across the bar toward him.

“All right,” she said, her voice loud as a gaggle of geese. “Go for it. Guess my drink.”

The crowd shuffled, necks craning for a better view. Fisher handed the shot of scotch to a bearded man, then paused to consider the woman again. He took longer than he needed; I could tell by the ready twitch in his right index finger that he’d known what he’d make from the moment he first saw her, but finally he nodded and started pulling down bottles, keeping the labels hidden. He took out a cocktail glass with an open, shallow bowl, his hands moving smoothly from one bottle to the next, the contents of the glass shifting from clear to pale yellow to a warm, dark amber. With a deft twist he dropped a slip of orange peel on top and slid it across to the woman.

Surprise washed the triumph off her face. “Yeah.”

“Try this instead.” She sniffed it; I could smell its fragrance, sharp and smooth, citrus and herbs and something almost metallic. The woman took a sip and glanced up, cocking her head at Fisher.

“Death and Taxes,” he said. She took a bigger sip and grinned. “Well, shit. Guess I have to pay.”

After that, it became a parlor trick—everyone wanted Fisher to guess his or her drink. People didn’t mind waiting when there was entertainment to be had. Construction workers chatted with girls in yoga pants; the regulars exchanged names with people they’d sat next to for years. Sometimes the new drink was just a slight left turn—rye instead of bourbon, the extra flowers softening the hard exterior of a glowering man. Sometimes the drink was something entirely different—an umbrella drinker, as Fisher would call them, switching over to a straight botanical gin.

“I don’t know how you’re doing this,” Izzy said to Fisher at the end of one evening, “but keep going.”

He did, night after night. For a full week, I cut out of work as soon as I could to get to the bar. I loved watching Fisher change the atmosphere around him. Everyone else thought it was magic, but I knew better. In the end, it wasn’t the flavors or the alcohol that made people relax—it was the experience of being seen and understood. And Fisher opened up right along with them. He was finding himself again, and I could sit there all night, watching.