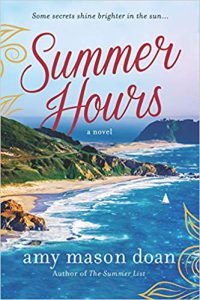 This week we look at an excellent tale of a pair of disillusioned 30 somethings who had gone to school together and are reuniting for the remaining member of their trio’s wedding. This week we are looking at Summer Hours by Amy Mason Doan.

This was a solid story told in both the past and the present, with the past storyline taking us through the best friend trio’s high school and college years and the present taking place around 2008 when the trio was now in their early 30s. The pacing is well done, with the story lines hinting at just enough of what is to come in each other to keep the reader diving back into the next chapter to see what comes next.

As a bit of a disillusioned 30 something myself right now, the book hit home quite a bit, particularly in its back half when the present storyline begins picking up and dominating. Indeed, there were five quotes in particular that stood out:

Indeed, this book resonated so much that it seems to have contributed to the slump I noted in last week’s Featured New Release of the Week entry, as this was the book I read immediately prior to starting that one. Very good book, highly recommended.

Boys of Summer. This was an excellent tale (though roughly double the average length of books I read) with a dual timeline in the 90s and in 2008. In the 90s, the main characters are just beginning their lives, and in 2008 a decade has passed and they are all dealing with the events of that decade. It works extremely well and hit home quite a bit for this reader who happens to also be in his 30s. Very much recommended.