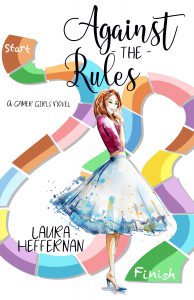 This was an interesting arc for Holly, one of the three best friends we were introduced to in She’s Got Game, Book 1 of this series. We pick up not long after that book leaves off, though other than spoiling that book this one can in theory be read standalone. (But read She’s Got Game first.) Holly has been left utterly devastated by the events of She’s Got Game, and Against the Rules is the story of Holly rebuilding her life and discovering what – and who – she wants… and having the courage to go after it, no matter the consequences.

In a bit of weird coincidence, Holly’s story even mirrors my own, to a point. As she is searching for her next programming job, she winds up interviewing in both Albany and Phoenix despite a nascent relationship she would like to explore, but knows will have to end if she moves to Phoenix (and even Albany is a stretch). My own story is that I had moved to the Southern Albany (the Georgia one, rather than the New York one Holly interviews in), where I had begun a relationship literally within days of quitting my teaching job and actively looking for my first programming job. The weekend before Valentine’s Day 2007 – when I had been dating this girl for less than a month – a company flew me out to Phoenix for a weekend long interview, similar to Holly’s experience. While hindsight would show the Phoenix interview to be an utter disaster, at Valentine’s Day I’m sitting in a Longhorn in Albany (Ga) having interviewed in both Phoenix and a town about 100 miles away called Macon, GA, and at the time I thought either equally likely. If I got Macon, I could make this nascent relationship work. If Phoenix offered me the job, I couldn’t ask this woman that barely knew me to leave her life and family and travel 1000 miles to live with a relative stranger.

In my own life, Phoenix basically told me to go to Hell… and Macon offered me the job. Moving to my nearby apartment was when I realized I loved this woman, and less than 2 months later she had the first ring from me. Within about 6 months of that move (give or take a couple of weeks), I had moved into her house in Albany and we exchanged a pair of rings there in the church she had grown up in. We had met less than 9 months earlier.

What happens in Holly’s life? Well, you’re just going to have to read this book to find out. 😉

Sometimes Rules Gotta Be Broken. In this continuation of the Gamer Girls trilogy, Heffernan brings an interesting board game concept to the story even as the game itself takes a bit more of a backseat as a driver of the overall story. Instead, the game of love takes a much more central focus in this story, and this particular game is truly excellent. Very much recommended, and I can’t wait to read Book 3!