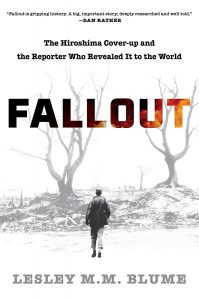 And as always, the Goodreads review:

Powerful History. This is a history not of the actual nuclear detonation at Hiroshima, but of one man’s efforts to uncover the coverup of just how horrific that nuclear detonation was. On August 31, 1946 – just over a year after said detonation – John Hersey published a four part expose in The New Yorker about the nuclear bombing of Hiroshima, Japan, and its immediate aftermath. It dominated that month’s print issue, supplanting both regular (and popular) cartoons and columns, and it would go on to become its generation’s Pentagon Papers or Edward Snowden. This book tells *that* history, the history of how Hersey was able to write the expose and its effects, including a discussion of Hersey’s followup piece 40 years later called Hiroshima: The Aftermath. And it does the entire history a great deal of justice in its easy to read narrative and comprehensive approach – this is the singular most well documented book I’ve ever read, with nearly 40% of the text of the book being its bibliography. That it is publishing the week of the 75 anniversary of the bombing is spot-perfect timing as well. Very much recommended.

Footnote: In 2015, The New Yorker published Hersey’s original Hiroshima essay on its website, where it remains at least to the time of the writing of this review. If you’ve never actually read that essay, or indeed are like me and had never even *heard* of that essay before reading this book, I also very much going to that site and reading this 30K word essay on the horrors of nuclear weapons, as told by some of the only people to have been able to tell the tale.