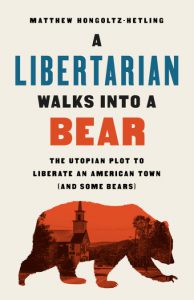 Interesting Story, Superbly Written – Yet Too Much Conjecture. This is an extremely well written book that takes a look at the Free Town Project, an initiative that seems to have splintered from the main Free State Project. Indeed, it is this very point that shows Hongoltz-Hetling playing loose with the timeline, as throughout the text here the author tries to claim that FSP came after Free Town, even as he is quite clear that Free Town began in 2003 – *after the creation of FSP*. Instead, the author details an entertaining tale of a wild cast of characters in the New Hampshire wilderness while constantly belittling the very people he is portraying and ascribes to bears much more critical thinking capacity than he documents actual scientific research to support. When he does mention another major center of the FSP – Keene – it is only very late in the book and he tries to portray FSP’s influence there as negligible at best, despite the wide prevalence of the Project there. Overall, the author’s preference for the bears over many of the people he is writing about is quite abundantly clear, and it ultimately tarnishes the aftertaste of the book as a whole, even with the entertaining bear stories. Perhaps this would have been better suited as a novel, rather than the nonfiction it purports to be. Recommended.