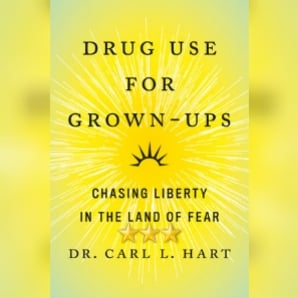 Interesting Perspective Marred By Bias And Lack Of Scholarly Rigor. Let me state up front: I am a former Libertarian Party official at the State and local level, and an avowed anarchist to boot. I fully concur with Dr. Hart’s position that all drugs should be fully decriminalized. And it was this agreement that had me initially wanting to rate this book at a full 5*.

But considering the actual arguments and the actual text presented, I cannot claim to be an objective judge of the merits of the books I’m reading if I did that. Because there are definite problems with this book that I’ve called out in no uncertain terms when I *didn’t* agree with the author’s positions – and thus I cannot ignore them here, when I do largely agree with the author’s positions.

Specifically, there is quite a bit of anti-white “they’re all just a bunch of racist pieces of shit” strawmen commentary in this text. Numerous cases where Hart blames racism rather than applying Hanlon’s Razor or even looking for alternative, non-race based reasonings for his opponents’ positions. And having been on both sides of this debate at different times in my life, I can testify as a fellow Son of the South (rural exurbs outside Atlanta vs Hart’s coming of age in urban Miami) that there *are* several other rationales other than the racism Hart claims is at the heart of all anti-drug laws.

Further, barely 12% of this text is bibliography, despite Hart claiming numerous times “I know I’m going to have to present some evidence here since this is not a commonly held position”. More often than not, rather than actually examining studies showing various harms from various substances, Hart dismisses them with the hand wave of a professor more concerned with getting his own point across, “there is no basis for that claim, we’re moving on”.

I actually enjoyed the less formal tone of the presentation here, as it made the book overall far more readable than some academics make their narratives. I simply wish the narrative were more substantive.

This review of Drug Use For Grownups by Carl Hart was originally written on June 18, 2021.