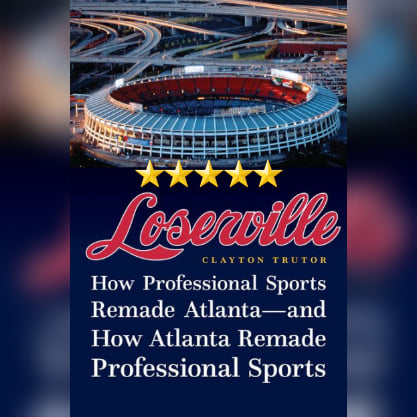 Intriguing Look At Atlanta And Professional Sports History. As I sit to write this review, the Atlanta Braves are less than 90 minutes from First Pitch on Game 5 of the 2021 World Series – and with a 3-1 lead over the Houston Astros, Atlanta stands a chance at winning the series in front of the home town crowd before the sun rises again, its first in 26 years. And yes, I’ve made it a point to read this book – which I’ve had on my ARC Calendar for seemingly a couple of months now – this particular weekend, for exactly this reason.

Here, Trutor does a phenomenal job of showing the full history of the first decade of professional sports in Atlanta, with all five of its major league teams at some point in the late 60s to early 70s – my parents’ own childhood, on the exurbs of the very town in question. Indeed, Trutor speaks of the *development* of things that were well-established by my own childhood in the same region in the 80s and 90s, such as the Omni, Atlanta-Fulton County Stadium, the Georgia Dome, and even Underground Atlanta (which apparently had been redone by the time of my childhood, as it wasn’t nearly so infamous then). He then does a great job of showing how while Atlanta was the first Southern City to acquire these franchises, there were (and are) several other Southern Cities that have largely followed Atlanta’s model over the decades since… with similar results, for the most part.

There are arguably two weaknesses to the version of this text I read: On a style side, the final chapter, covering in broad strokes what happened in the other Southern Cities that tried to follow Atlanta and how they turned out over the years, is a bit of an abrupt ending. Apt, but abrupt.

The other is that Trutor tends to argue that race played quite a bit of a role in the development of Atlanta Sports and what I came to know as the Geography of Atlanta. I wasn’t alive during the periods Trutor mostly covers, so I can’t speak to those periods as the Native Georgian I am. But I *can* speak to one move Trutor covers, if briefly – the Braves’ move from Turner Field to SunTrust (now Truist) Park over the last decade, where fans are finding their seats as I type this to hopefully watch their hometown baseball club win the 2021 World Series. I was actually there for that one, and as one of those fans on the northern Perimeter I can attest to a lot of the fears about safety and finding a good (yet not overly expensive) parking spot at Turner Field. (Atlanta-Fulton County Stadium, where I saw my first Braves games as a child and even a monster truck rally or two, was demolished right around the time my age began having two digits in it, so I can’t speak to issues there.) I can also attest that the new Battery design is much more conducive to getting me to spend money in the area immediately around the park, which is something the former Atlanta-Fulton County Stadium / Olympic Stadium / Turner Field site has never offered. But these are observations from a native who has been to the relevant areas throughout his life – vs a Vermont-based academic.

Even with these differences though, Trutor’s work here is truly well written and solidly documented – roughly 20% of this copy was bibliography, and the prose here is enlightening and engaging without ever going too deep into “academic speak”. Fans of Atlanta and Georgia sports or history are absolutely going to need to read this book, and indeed fans of major US sporting in general should fine quite a bit here to be illuminating. Even people who decry “sports ball” will find an utterly fascinating read about a little-documented series of events that has come to shape, in parts, the entirety of American professional sporting. Very much recommended.

This review of Loserville by Clayton Trutor was originally written on October 31, 2021.