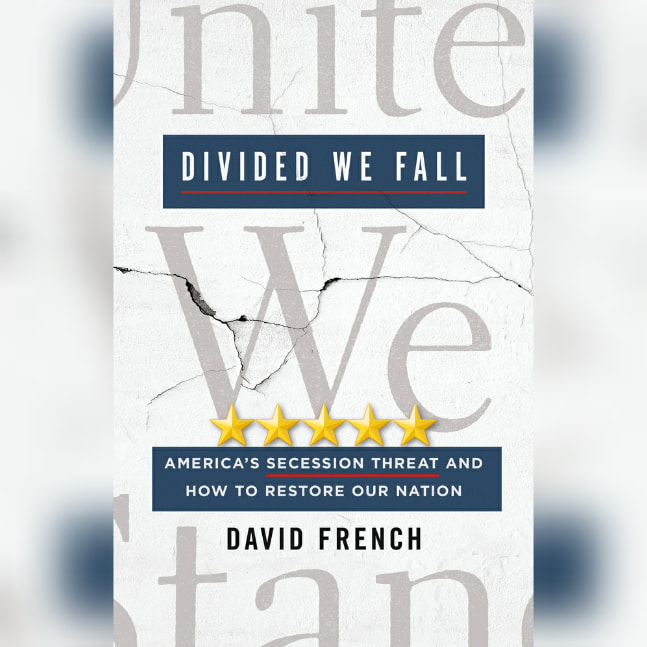 In light of last week’s US Supreme Court rulings upholding the Second Amendment to the United States Constitution and striking down Roe v Wade, and the fact that the middle of this book contains two prognostications for how the US could completely come unglued and each of those decisions last week plays into one of them, I’m doing something never before done in the history of this blog and bringing back a former Featured New Release and making it this week’s Featured Release post. Thus, this week we are again looking at Divided We Fall by David A French.

Looking through French’s tweets and writings on his site, it appears that there is much we will disagree over on many policy issues – I’m not exactly quiet about being an avowed Anarchist and 2nd Amendment Absolutist. (Pretty much an entire Bill of Rights Absolutist really, but there is at least some commonality with French on at least some of those points, apparently. :D)

But ultimately, I think we largely agree that the partisanship America is seeing right now is destroying it – and we seem to be edging ever closer to the moment of no return.

I said two years ago when I first wrote my Goodreads review of this book that “Quite simply, I’ve yet to encounter a more important book for every American to read *immediately*, and *particularly* before you vote in the General Election this fall.” I thought then that this book should get quite a bit of attention, that it mattered and could help save this nation.

Given the events of the last week – not to mention the last 20 months or so since the publication of this book – I maintain this position with even more voracity. We’ve seen demonstrations all over the place. We continue to see both sides blatantly lie about the other side. We continue to see the hate and vitriol expanded on both sides to truly chilling degrees. If you care about saving this nation, if you care about preserving the American experiment even so much as another decade, you *need* to read this book and take its recommendations to heart.

And maybe, *maybe*, *together*, we can still save this land.