Pleasurable Writing. In this continuing saga of Private Investigator Jude Byrne and Witch/ Medium Copeland Forbes’ lives together, we get some of the more hilarious scenes of this spinoff series (and arguably even the entire connected universe) and ever more harrowing threats. And seriously, the truly hilarious scene is one of the more explicit scenes, involving a particular toy used to great effect both comedically and sexually. The investigation this time is excellent, and the threat a very sad reminder of America’s not-so-distant past. At this point in the series, I can’t recommend starting the series here – but I can say without hesitation that if you begin with Haunted Souls #1 you will enjoy the progression when you get here. Very much recommended.

This review of Ghost Writer by Pandora Pine was originally written on July 19, 2020. 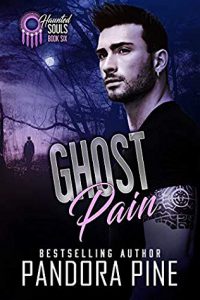 And with that… the Goodreads/ Amazon review:
END_OF_DOCUMENT_TOKEN_TO_BE_REPLACED

Jude And Cope Face Their Toughest Case Yet. Particularly with this “spinoff” of Pine’s long running Cold Case Psychic series, she is doing a *great* job of making the cases and battles ever harder with every outing, and if they can get tougher than this particular one… well, Jude and Cope won’t like it one bit. 😉 Continuing her excellent work of showing the professional and personal dramas, this particular book isn’t a good place to start with even this spinoff series… but it could well be a good place to end it…

This review of Ghost Of A Chance by Pandora Pine was originally written on September 8, 2019

Beware Hitchhiking Ghosts! In this sequel to Ghost of Himself, we come back to Jude and Cope’s slow-burn romance as it continues to slowly burn, but with some pretty significant developments here for Jude in particular. All of this happens against the story of a mysterious Woman in White who is haunting and even outright harming a 15 yo boy. And yes, there are hitchhiking ghosts involved as well – including ghost HTML in my read through! Excellent story yet again, and I’m very much looking forward to coming back to Jude and Cope in their next adventure!

This review of Ghost Story by Pandora Pine was originally published on March 5, 2019.