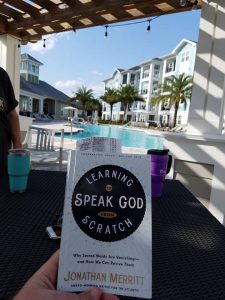 Earlier this year – back in February or so – Jonathan Merritt told his social media followers that his new book was on pre-order already and would be released in a few months. I’ve been a fan of Jonathan’s since his 2012 book A Faith of Our Own, so there was no question – I immediately pre-ordered the book. Didn’t even have to know anything about it other than he wrote it.

I actually recently had a chance to actually read the book as an ARC, and – to steal part of the title of his 2014 book – it was “Better Than I Imagined“.

The setup was a familiar tale of a kid from the suburban South moving to the Big Apple… and realizing he couldn’t communicate with anyone using the words he had grown up using and had been using as a professional in his field for several years. One of those timeless tales, really.

But that doesn’t even get to the good stuff, and fortunately the setup, while interesting, mostly is there to explain what comes next.

For the rest of the book, Merritt takes words that are heard in nearly any and every Southern/ Evangelical Christian conversation and dissects them down to the message they are really trying to convey, then looks at how we can convey that message better in some way. And just as with his other books, once he gets to this part of the book is where he really shines.

Various words will mean more or less to various readers, but I found a few truly profound.

When discussing PAIN, for example, Merritt reveals his own battle with chronic pain and how it has both shaped and transformed him in unexpected ways. When discussing CONFESSION, Merritt speaks to a controversy that erupted around the time of the publication of his last book and what he now thinks about it.

When discussing BLESSED, Merritt takes aim at #HollowHashtags, and when discussing NEIGHBOR, he connects Fred Rogers to the current refugee crises.

But for me, the most transformative word Merritt discusses in the entire book is also the last word he discusses in the book, and one of the ones far too many Christians use to cause the most harm: LOST. Merritt’s words here are truly profound, more needed for the American Church than anything I have ever heard his former Southern Baptist Convention President father say in any sermon. And not to be spoiled in a blog post a month before release day.

To find out what Merritt the Younger* has to say about Learning To Speak God – words like PAIN, BLESSED, NEIGHBOR, LOST, SIN, PRIDE, SAINT, CONFESSION, GRACE, BROKENNESS, and even GOD – From Scratch, you can pre-order the book from your favorite bookstore by visiting SpeakGodBook.com. If you speak God at all, from any angle and from any belief, this is truly a book not to be missed.

*A brief note on “Merritt the Younger: As I (probably too often) say, Jonathan and I grew up not far apart in age or geography or culture. He lived – and his dad worked – in the northeast side of the northern Atlanta suburbs at the same time that I lived in the northwest side of the northern Atlanta suburbs. When I was getting dressed to go to my own church on Sunday mornings, depending on the exact time in question it was either his dad or Charles Stanley preaching on my TV. Thus, James Merritt was among *the* most respected men both with myself and those men in my own church that I looked up to. For me, using “Merritt the Younger” to tie Jonathan to his dad, while seemingly unfair in that it never lets him out of his dad’s shadow, is the highest compliment I can give him – I truly have come to respect Jonathan as much as I do his dad.