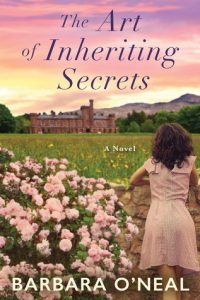 I’ve never met nor interacted online with Ms. O’Neal, and admittedly the setting of this book was one that I have absolutely no familiarity with at all other than the occasional TV show or movie, and who knows when those things are actually accurate? But the central character herself proved as relatable as can be expected for a first person female perspective being read by a male. Olivia Shaw’s mother has died, and she left behind some substantial secrets – the most obvious of which being that she had a full estate and title in England that Olivia has now inherited and must decide how to handle. She’s also dealing with having been out of work for a few weeks already due to breaking her leg, and once we meet up with her in England on the first page, she’s already dealing with the fact that her relationship with her fiancée doesn’t feel as close as it once did.

As Olivia gets introduced to the land she inherited and the land and people nearby, we come to know more about her, them… and her mother’s far darker secret, along with a tragic secret from her grandmother. And pretty much everyone tends to grow on at least this reader, from the charming townspeople to the knowing Baron of a nearby estate who takes Olivia under his wing. We see a fair amount of character development over the months covered in the story as Olivia struggles to learn to become the new Countess of Rosemere, and we fall in love with the land at the same time she does.

Overall a very strong tale, if not quite the same as I’d come to expect from Lake Union and indeed not a type of tale I would normally pick up on my own. Definitely a worthy read, and I’m very glad I picked it up, even if I was more concerned with the publish date than any other factor when I originally chose to read it. Now that it is out, you should absolutely pick this up and read it at the first opportunity you have. You won’t be disappointed.

And once again, I leave you with my Goodreads/ Amazon review:

Sneaky Book Hangover. This is one of those books that has a way of sneaking up on you, in all the good ways. In the beginning, we’re thrust into the world of a food editor who has just arrived in England after only recently finding out that she has inherited a full English estate and title. Throughout the book, we discover things as she does, and through the first half of the book what we discover is mostly that she is falling in love with both the countryside and its resident thatcher. The “secrets” come mostly in the back half of the book, and they are tragic yet beautiful. While the timing of my own reading of this could have been better (reading a book about falling in love with the English countryside over July 4…), this really will make a great read anytime, but particularly (for my own tastes) as a late summer read – which means its release in mid July is timed nearly to perfection.

0 Replies to “Featured New Release Of The Week: The Art of Inheriting Secrets by Barbara O’Neal”