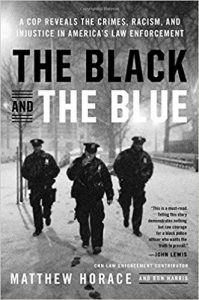 This week we branch out into our first nonfiction book, again from NetGalley. Today, we’re looking at The Black and The Blue: A Cop Reveals the Crimes, Racism, and Injustice in America’s Law Enforcement by Matthew Horace.

Now, this one was a bit interesting for me. You see, even up until the week before I started this site, I had been active in fighting police brutality for most of the last decade. Indeed, I was fighting police brutality before America had heard names like “Walter Scott”, “Michael Brown”, “Tamir Rice”, and numerous others. My story truly began with some cops illegally questioning me – a smart yet unpopular “weird” lower middle class white kid in the suburbs – without so much as a parent or school counselor, much less a lawyer, present. But my story really picked up when I began hearing names like “Kathryn Johnston” and “Jonathan Ayers”, then I was following online as some online acquaintances were harassed as they drove across America searching for liberty. They would found CopBlock.org soon after, and for the next several years I would be involved in that project locally, regionally, and even nationally at various levels. As recently as earlier this year, I finally created my own website to track all instances of people killed by police in America yet allow some basic reporting on the issue, something no other website did anywhere near the level I did.

So make no mistake about it, while I gave up that life completely when I came into this new world of book blogging and putting my efforts into books and publishing, I have a very strong and still quite recent history of doing everything I can to illuminate and bring awareness to the issue of police brutality in America.

Which is why coming into this book was so interesting for me. For someone like me to sit there and read the words of not just a cop, but someone who actively trained other cops for years, knowing all that I know? It was actually an interesting and at least somewhat pleasant experience.

Structure wise, this book probably wasn’t as comprehensive as I would have liked, and I indeed recommend the far superior book Rise of the Warrior Cop: The Militarization of America’s Police by Radley Balko, written over a year before #BlackLivesMatter became a thing, from that side. This book instead takes a personal look at a few instances from Horace’s own career as a cop, from his days on the streets of Baltimore to his ascendancy into the upper echelons of the Bureau of Alcohol, Tobacco, and Firearms while also spending a good chunk of the book examining Chicago, Ferguson, and New Orleans in detail. There are a few grammar issues, mostly misplaced words similar to the clearly intended word.

Overall narrative wise, the book flows well and is an interesting and fairly easy read. The transitions are fairly seamless, and the sections allowing cops from all levels to discuss different topics worked well with the chapter they were placed with. The story was much more balanced than I expected from someone in Horace’s position, while still lacking in certain key areas to my tastes – but surely too much attention in certain areas for the tastes of someone more pro-cop than myself.

Overall this is in fact a book I recommend, just at the 3 star level and with recommending that Balko’s book be read as well. To me, it really does add a voice that can be missing from these conversations at times, and while Horace never does what is really needed, he does in fact seem like someone at least willing to hear all sides – even if he has his own preconceived notions that will not change regardless.

And the obligatory Goodreads/ Amazon review:

Missing Two Very Important Words. In this book by former high ranking ATF agent Matthew Horace, we get an inside look at the problems and perils of policing in America through the eyes of a man who is both black and blue.

The book overall was very surprising to me, as I happen to be a former leader in the Cop Block movement, who has been active in fighting police brutality since a few years before anyone had ever heard of Michael Brown or Black Lives Matter (the organization). It was surprising in its balance, in that he at minimum admitted how bad police are, his own particular abuses, and that this is not “a few bad apples”, but the entire system and culture. All of this was refreshing to hear a cop say, and very welcome.

At the same time, however, rather than fully accept responsibility for *not killing people*, Horace routinely makes excuses and says that the ultimate responsibility for ending police brutality lies with politicians, community leaders, mental health providers, businesses, indeed *anyone* but police themselves.

Structure wise, the book spends quite a bit of time – roughly half its 14 total chapters (counting the epilogue as a chapter) – looking at the New Orleans and Chicago police departments specifically. The rest is a more general look using Horace’s career as a lens. He looks at a few specific and infamous incidents, including the Danzinger Bridge, the aforementioned Michael Brown case that spawned the Black Lives Matter organization, and the Laquan Mcdonald case that threatened to plunge Chicago into chaos, through the lens of someone who both investigated and trained police in proper procedures, and often makes it a point to point out exactly where the police made the mistakes that resulted in the body bags. Unfortunately there are also a number of grammar errors throughout the book, often a misplaced word similar to a word that was clearly intended.

Overall, this is a recommended book, if only because it is so thorough, balanced, and from this particular viewpoint. I would still recommend Radley Balko’s 2013 classic The Rise of the Warrior Cop: The Militarization of Police in America as a better look at the overall issue, but this is a solid companion to that book. I’m going with 3 stars for now, but honestly there was considerable debate within my head between three and four stars, and I can see cases for both.

The reason for the 3 stars? Even while admitting his own abuses, he neglects two very important words America needs to hear from even formerly abusive cops: