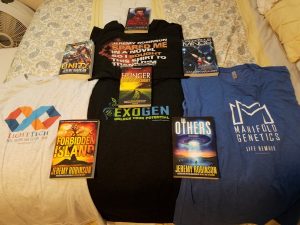 Two weeks from this morning, I take an Uber over to Jacksonville International Airport to fly up to Boston’s Logan International Airport to take a bus to Portsmouth, NH. There, I will finally meet a man I met online back in the Myspace era a decade ago. Back then, the guy had written just two novels, and was publishing them on demand (the Kindle had just come out a year earlier and was still a few years away from becoming what it is now). I ordered both of his books from him, and when I read The Didymus Contingency, I was hooked. (The organization featured in that book is actually the one featured on the light gray shirt in the picture.) Antarktos Rising, featuring a crustal displacement event a couple of years before the movie 2012 would come out and make that idea somewhat popular, just sealed the deal. From that moment, I read every book this author put out – now over five DOZEN books in that decade.

This author – Jeremy Robinson – has become the single one I recommend the most to people, in part because he really is that good and in part because of how prolific he is. I say he is the Master of Science Fiction, and there is a reason for that – I know of no other author (ever) who has written in more science fiction sub genres than he has. And not only that, but with the characters and ideas he writes about, it is to the point that almost no matter what a particular reader is interested in, there is probably a Jeremy Robinson book that is close enough that they may be interested in reading it.

And over the decade, it has been one hell of a ride. I’ve been so scared I had nightmares for weeks (TORMENT). I’ve read PULSE pounding military/ creature thrillers with the Chess Team / Jack Sigler Adventures – which are coming to a close with the next book in the series. I’ve sailed over and under the Atlantic with the fish from the Biblical story of Jonah in KRONOS. I’ve explored the furthest reaches of the galaxy – and my own mind – in INFINITE. I’ve watched a young woman who just discovered she was pregnant try to go THE DISTANCE and survive an apocalypse for herself and her unborn child, and I’ve watched another young woman named Jenna Flood survive a bomb meant to kill her and fight to find out why someone wanted her dead. I’ve watched surviving Nazis try to create a SECONDWORLD, and I’ve seen a man who everyone thinks is Crazy be able to walk in a MIRRORWORLD. I’ve seen a XOM-B, and I’ve seen an APOCALYPSE MACHINE and I’ve seen a DIVIDE to try to save at least some of humanity. I’ve seen a PROJECT with Godzilla and Pacific Rim style giant monster/ robot fights, and experienced an Avengers Level Event that was at least as long in the making as the original Marvel’s Avengers movie – and even more epic. (Without giving too much away there, whereas in Marvel’s Avengers, the team had to come together to save *one* Earth, in Jeremy’s Event his team has to come together from multiple realities to save ALL realities.) I’ve watched a kid be kidnapped by monsters and transform into the King of Antarktos, with unparalleled power over that continent’s elements.

And I’ve even personally caused the Apocalypse by trying to save the planet by solving world HUNGER.

Yes, I – among many of his other fans in various books – have been written into one of Jeremy’s books. So far, I’ve survived – hence the top shirt in the pic above. I’ve even gotten a version of the tattoo that features heavily in UNITY, where a group of kids have to come together to save the world. To my knowledge, I am literally the only real person with this tattoo. (Another fan of Jeremy’s has a tattoo of a symbol featured heavily in the CHESS TEAM books.)

So now I actually get to finally meet the man behind all of these adventures in person and hang out with him for a weekend in his own turf at an event – Robinsonfest – that he has been putting on for a few years now. I get to share a few meals with him and go go-karting with him and go searching for Leviathan with him and hang out in an area somewhat similar to the Chess Team’s base of operations, among other things. I even get to meet at least a few people I’ve met online through Jeremy, including his editor and co-author Kane Gilmour, a friend I run a Facebook group with and who is an author himself in Xander Weaver, and a few other mega-fans of Jeremy’s that I’ve known on Facebook for several years. (And I may wind up dragging them over to Maine to try “barbecue” tofu – because this Southerner distrusts any Yankee claiming to be able to barbecue, and “barbecue” tofu is just blasphemy. If nothing else, I have to go try this stuff myself. :D)

For me, this is more exciting than going to Disney World – and may well be the same kind of trip that most people have at Disney: once in a lifetime.

But even if it is once in a lifetime, it is going to be one hell of an adventure, and I can’t wait. 😀