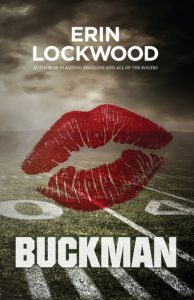 This was a visceral look at one woman’s rejection of all things relating to fame… even as she falls in love with one of the most famous athletes in college football. April Moxley is the daughter of the drummer of legendary rock stars Libra, and after spending her teens touring with her dad after her mother’s untimely death, she now structures her life to stay as far away from anything remotely relating to fame as possible.

Until she stumbles into star quarterback Tallan Buckman on the field after the last home game of the season… literally. Now, Tallan is doing everything he can to woo this woman who keeps rejecting him at every turn… and April is conflicted.

This was a truly remarkable book about football from an author who clearly loves the sport, told from the perspective of someone who clearly wants nothing to do with it. It ranks up there with books such as Bleachers by John Grisham or movies such as Friday Night Lights, Remember the Titans, or Varsity Blues. Yes, it is truly that good.

So go pick this one up today, while most of the SEC is on an off week.

Excellent Non-Football Football Story. This is a romance told from the girl’s perspective that happens to involve a star quarterback and the pressures he faces. Definitely a recommended read, particularly during the college football season. Just ignore the implausibility of this particular school doing as well as it does it the book – it is the author’s alma mater. 😀 As a romance, this is one of the better ones I’ve read this year. As a football story, it actually ranks up there with John Grisham’s Bleachers – yes, it is *that* good, and rare in that it *is* told from the non-football fan girlfriend’s perspective. Seriously, stop reading this review and go buy this book. 🙂