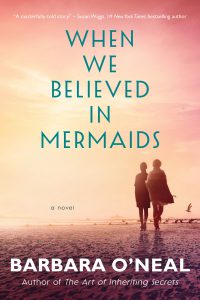 This week we are looking at the new book from the author whose 2018 book became only the second Featured New Release of the Week on this blog one year ago this week. This week, we’re looking at When We Believed In Mermaids by Barbara O’Neal.

This book examines trauma and what exactly two sisters will do to cope with what has happened to them, and it opens with one of the better opening lines of any book I’ve ever read. One sister uses the shared traumas to push herself into medical school and a successful career as an ER doc. The other… doesn’t cope so well and eventually takes some pretty extreme measures to escape.

Along with a current timeline story of where the sisters currently are decades after the earliest flashbacks in the story happen (and even 15 years after the one sister’s desperate escape) we get constant flashbacks to different scenes of childhood traumas, and it is these scenes that the waterworks really begin. We see traumas of many forms and brokenness of even more, and O’Neal does a stellar job of putting us in the minds of the girls as they experience them. But she does an equally adroit job of putting us in their heads years later in the current timeline events, when things are going much differently for both sisters.

An excellent book that hit closer to home than some due to me living just hours away from my own brothers and admittedly missing them more than I let on. No, we didn’t have the traumatic childhood these two girls faced – *far* from it – but the sheer distance of physical separation is there, and that alone made this tale particularly relatable.

Truly an outstanding work, though of a much different and much more intense direction than last year’s work – and thus showing signs of just how good of a storyteller O’Neal herself is.

As always, the Goodreds/ Amazon review:

You’re Going To Want To Read This Somewhere Where You Can Cry. Wow. This is a tragic tale, all around. It is primarily about two sisters and the scars they share – and the lengths they will both go to try to overcome them. Amazing story, solid mystery (though some of it becomes obvious earlier than the actual reveal). This one will grabs you with the first line, has you tearing up a bit early on… and then can have full on water works through the last quarter to third or so of the tale. Light and airy, this aint – but it *is* one of the better, more intense dramas I’ve read this year. A remarkable contrast to O’Neal’s 2018 book The Art of Inheriting Secrets. Very much recommended.