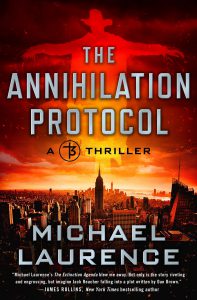 If you’re looking for a James Rollins / Matthew Reilly / Jeremy Robinson level balls to the wall, barely have time to breathe thriller… you’ve found one. Here, Laurence uses chemical weapons so creatively at times that it is truly hard to imagine him not drawing the attention of various US Federal agencies in real life. He also manages to incorporate one particular WWII era group very effectively into the backstory of this tale, to horrific portent in the actual tale itself.

More importantly for the overall direction of the series, Laurence manages to skillfully introduce what could very well be a key pivot point for the series. While the initial premise of a secret group working to eliminate a large portion of humanity is what drew me into this series and is where I hope the series is allowed to continue to go, to do that effectively the series needs to travel to areas it has yet to go even by the end of this tale. But going *there* could be a bit more problematic than some would like, and so, pivot points are introduced. Let me be as clear as the purest crystal though: I want this series to go in a direction where the bad guys truly try to kill off a large portion of humanity – Thanos level at *minimum* – and the good guys at least attempt to stop them. Those stories don’t get told often enough with the truly global scale they truly need to be effective, and this series even by the end of this tale still hold promise that it could go there and be phenomenal.

But the pivot introduced in this tale is very nearly as interesting, and could in fact be a nice little wrinkle in the overall “extinction threat” genre. Indeed, it could even serve as a way to have a somewhat definitive endpoint similar to the initial target of eliminating or saving humanity, and because of this could serve to help keep the action taut and furious. While I would be a bit disappointed if this option is pursued over the extinction threat, Laurence shows here that this would be but a quibble and that he is more than capable of delivering on a superb tale in that direction as well.

In the end, I’m hooked on this series and I’m gonna follow it as long as Laurence keeps writing them, no matter where he eventually takes it. I hope you’ll join me on the ride. 😀

This was an excellent entrant to this series, and one that potentially allows Laurence to pivot the series a bit if needed. Laurence shows excellent creative work in coming up with some very interesting chemical weapon delivery mechanisms, to the point that I would not be surprised to learn he has drawn the attention of various alphabet soup agencies while researching this book or at least once it publishes and they begin reading it. Interesting use of a long-known-yet-still-not-officially-acknowledged bit of world history to further this saga, and particularly well executed there as well. While I very much hope Laurence is allowed to pursue the initial direction of the series, this book sets up a pivot into a short Black List type tale with much more at stake than that show ever really had going and that pivot could be very nearly as interesting given Laurence’s storytelling abilities. Very much recommended.