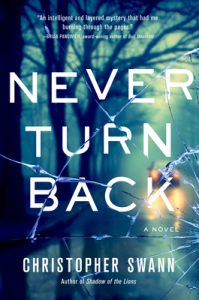 This book is set in and around Atlanta, Ga – which happens to be where I am from (well, the northern exurbs anyway). And which happens to have had a very similar – and very nearly equally as tragic – incident as the backstory that drives much of the action here. You see, I was actually very tangentially tied to the real-world story.

Revealing what actually happens in the book would be a spoiler, but allow me to note what happened in real life.

May 1999. Just a couple of weeks after the Columbine shooting.

Suddenly, their across the street neighbor – who happens to be a local radio celebrity – bangs on the door. The boys let her in, as she is fleeing from her exhusband who is intent to kill her. She hides somewhere in the house.

The exhusband demands to know where she is, and enters the home via blasting the door down with his shotgun.

Time passes, cops have surrounded the house, and now the two sons are in a back bedroom with the exhusband. He has leveled the shotgun at the younger son, demanding to know where his exwife is.

The elder son jumps in the way as the shotgun is fired, and is killed as a result. The younger son still catches shot in his shoulder and is hospitalized. But the blast – and death – create the opening for the cops outside to kill the shooter, which they do.

Yes, this really happened. The younger brother was actually in at least a couple of my classes. I knew him and his mom. I was a new student at the school, having transferred from another school across the County just that very semester. I was there as the school sat in shocked disbelief all week at what had transpired to kill one of our graduating seniors – in a school that would only graduate 67 students two years later. I would go on to be one of those 67 students graduating high school from that school two years later… though I would barely step foot in it at all over those two years. How I spent those two years – and the four more beyond them – would also result in me becoming a young male teacher in my early twenties, which is another point that I personally identified with this story on. Fortunately for me, only this particular incident of the backstory is even remotely similar to anything I actually experienced – as you’ll see when you read this book.

But what could be even more tragic than the real world story? Well, to find out – and to see what happens as a result… you’re gonna need to read this book. 😀

Solidly Paced Mystery. This was a fun romp through Atlanta and North Georgia that starts out seeming like it doesn’t really have a point before pivoting in one direction… and then nearly causing whiplash with an out of the blue pivot in a complete other direction still. Really, really fun book that has somewhat of a surprise/ shocking revelation in the last 10% before ending on a much more contemplative note. This was my first book from this author, and if he continues to write these types of tales it certainly won’t be my last. Very much recommended.