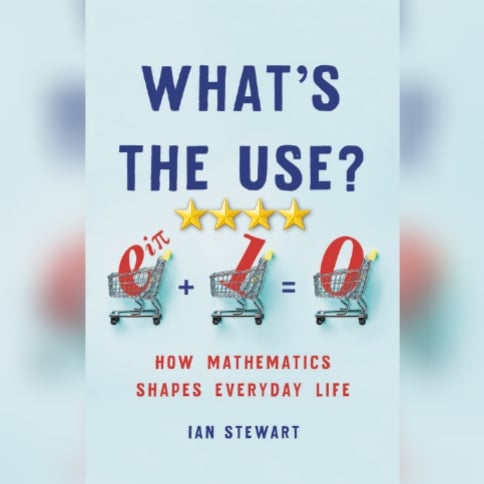 Beware The Mathivores. And Stewart’s Myopia. Ok, so the title of this review is a bit of a spoiler, as a “Mathivore” is a creature Stewart describes in the final chapter while summarizing the book. But it doesn’t *actually* give anything away, and it makes for an interesting title to the review. (One suspects it wouldn’t have worked as well for the title of the book, though I think it would have been awesome. :D) Beyond that, I also find it interesting that the only other review on Goodreads for this book at the time I am writing this one is from a historian with a bare knowledge of mathematics, and I am actually a mathematician (though nowhere near as degreed as Stewart, having just a Bachelor’s degree in Computer Science and lacking a handful of classes for separate Bachelor’s degrees in both Mathematics and Secondary Mathematics Education) with a fair knowledge of history. More than a “normal” person, likely much less – at least in some areas – than the other reviewer. ANYWAY, y’all care about what this book is about, not about me. 😀 But my background does play a bit into my own experience with the book, so I thought a brief summary was warranted.

With this book, Stewart *mostly* does a truly remarkable job of showing the history and current uses of math, in many ways many may not be aware of or at minimum fully aware of. With my background, I knew that there was *some* form of math in the background of most of the techs and issues Stewart discusses, but Stewart goes full-bore on the details, yes, quite often showing samples of the actual equations – or at least types of the actual equations – involved. And these are far beyond E=MC^2, y’all. 😉 But still, Stewart’s explanations, at least to my own mathematically inclined brain, were straightforward enough, and there is enough humor (of the British variety) sprinkled throughout to make the overall text much more palatable to the average reader.

But there *are* a couple of weaknesses even from my own perspective, and they combined to knock the book down a star – neither by themselves was quite enough, but combined they are.

The first is that while Stewart does a remarkable job of showing how math is integral to so many fields from elections to medical scanning to photography to fingerprinting, he doesn’t do so well in showing how it shapes everyday life outside of the tech people use and the things going on around them. He doesn’t show how people actually *use* math every day, from calculating how much a trip will take to estimating their grocery bill or restaurant tab to deciding any of the numerous factors related to personal finance and building or maintaining any form of home. Perhaps a follow-on book could explain how these maths shape even more people’s lives.

The second is Stewart’s Myopia. By this, I mean those issues where the Professor. At several key points – likely not caught by someone less familiar with the mathematics of the fields – Stewart dismisses advances in mathematics that oppose his positions. In one, while there is indeed still much work to be done, Stewart’s disdain for autonomous cars belies the stunning advances made in mathematics related to the field. In the other big one, Stewart seems completely ignorant of the emerging mathematics showing the many varying holes in the current “Climate Change” “science” – including some written by a man who quite literally wrote one of the first textbooks on climate modeling with computers. Another, more obscure one, was where Stewart mentions numeracy and Bayesian statistics, but seems ignorant of Bernoulli’s Fallacy (or at minimum dismissive of those who pursue that line of mathematical thinking).

Overall, this *is* a strong book with quite a bit to be commended. It could simply have been a bit stronger. Very much recommended.

This review of What’s The Use by Ian Stewart was originally written on July 26, 2021.