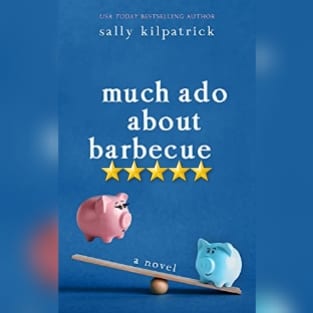 Fun Southern Enemies To Lovers Romance. The title of this review tells you most everything you need to know here. This book has quite a few moving parts, but overall they work together to create a solid, fun Southern romance – in this case, centered on the titular barbecue and the retelling of Shakespeare’s Much Ado About Nothing. The intricacies of barbecue – and no, you damn Yankees and foreigners from other nations (joking, an allusion to Southern comic Jeff Foxworthy’s “Redneck Games”), simply putting something on a grill is not “barbecueing”, nor is the grill itself a “barbecue” – are discussed well, but always in context with and service to the overall story and character development. Small town southern life, with all of its greatness and pitfalls, are also shown well – yes, including the one person who claims to be able to speak to ghosts. The pranks are mostly in the past, and it is always quite clear that they were in the past. The reasons for the enmity between the leads are compelling, tragic, and completely “reasonable”-ish for where the characters were at those points, and the slow-burn nature of the romance allows both to see that perhaps there is more to the adult versions of each other than they remember of the kid versions. And that perhaps there was more going on with the kid versions that their own kid versions didn’t fully know about. For the clean/ sweet crowd, this has very minor cussing – including a grandma who actively admonishes such words in her presence – and no even fade-to-black sex. (Some heavy kissing though, for those more absolutist against absolutely anything physical.) Oh, and there is a more minor subplot – revealing even its nature would be a spoiler – that is refreshing, accurate… and yet still feels mostly thrown in due to the author’s own political leanings. It totally works, and it is nice to see an author defying the normal conventions of the genre to even subtly go there, and yet it also *does* feel a bit forced, as though this was a wrinkle intentionally placed to draw the eye away from the actual main subject to a degree. Still, on the whole a solid, fun romance novel that does a great job of explaining Southern Barbecue, and very much recommended.

This review of Much Ado About Barbecue by Sally Kilpatrick was originally written on August 11, 2021.