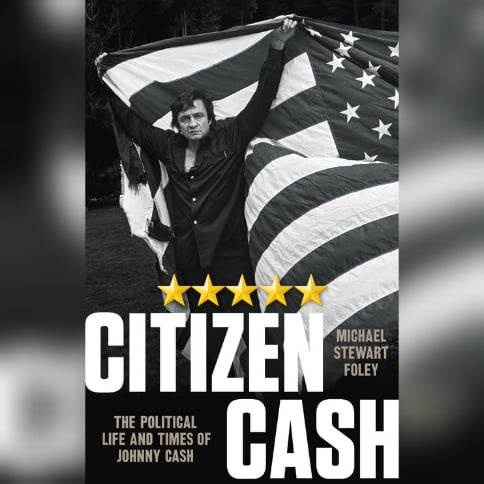 Detailed Examination Of Forgotten Elements Of A Legend. I grew up listening to Johnny Cash, Waylon Jennings, Willie Nelson, Merle Haggard, and others of that generation via Country Gold Saturday Night on the radio in the late 80s and early 90s. My family would pile in the pickup truck, parents in the cab, myself and my two younger brothers in the back, and we would ride the backroads in the boonies of northwest Georgia between Atlanta and Chatanooga, listening to the radio and feeling the wind buffet our bodies. Honestly some of my most fond memories of the carefree era of my childhood, and Johnny Cash played a role there – a role he never knew about. And while I’ve known of him since then as a country music legend, I had never considered his politics or messages.

This book changes that.

This book, with its chapters focusing on specific elements of Cash’s political beliefs and how they developed, is less biography and more analysis of how the given message came to be espoused by this particular man and why. It shows that at his heart, Johnny Cash was a man who empathized with the low and down trodden. How his own childhood on a Depression era sharecropper farm came to shape much of how he saw the world, and how even his service in the US Air Force in Germany during the Korean War era would come to shape his views of the Vietnam War a decade later. The text does not shy away from Cash’s well known (and well documented) struggles with drugs and alcohol, even showing where Cash himself was hypocritical on the issues at times – ordering his wife never to touch alcohol, even in some letters where it is quite clear he himself is drunk while writing them. At the same time, it doesn’t spend much time on these particular facets or even his wives, the controversy surrounding how he eventually got together with June Carter, his various kids, or any other aspect an actual biography would. Instead, this text uses biography more as background and scaffolding to show how Cash came to the political positions he did and how he came to espouse them.

Truly an interesting take on a genuine legend, and very much recommended.

This review of Citizen Cash by Michael Stewart Foley was originally written on October 28, 2021.