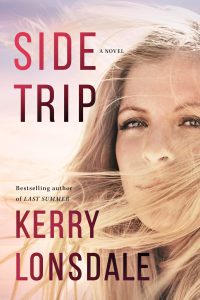 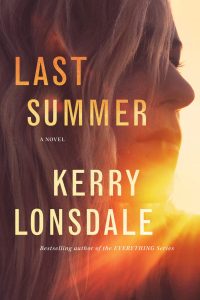 This week we look at a book that is explosive until almost literally the very last word. This week, we look at Last Summer by Kerry Lonsdale.

With this book, as she did in her Everything series, Lonsdale yet again explores a memory-related condition while telling a compelling tale of love and, in this case, manipulation. If you haven’t yet read the Everything series, this is an excellent introduction to Lonsdale’s style and ability.

This is yet another recent book that explores a particular concept that is finally becoming more recognized in the mainstream, even though yet again this book doesn’t use the preferred term for the situation, and there seems to be a growing consensus among fiction writers who broach it – carrying on a relationship while disagreeing on this situation pretty well dooms the relationship moreso than any other factor. To reveal the particular situation would be to toe the line of spoilers if not cross it, and that isn’t something I want to do in these posts. So go read the book to discover the situation I am referring to here. 😉

Epic Conclusion. In this conclusion to the Everything Trilogy, we follow up shortly after the ending of the 2nd book and get an Ian-centric story this time. In it, we struggles as a kid trying to deal with his mother’s Dissociative Identity Disorder and how the issues that it caused have played out in his adult life. Humourous with inside jokes for the reader at times, particularly when Aimee follows up some thought with “but that is [Insert James or Ian Here]’s story to tell”. Overall this is probably the heaviest of a heavy trilogy, but it is a fitting conclusion that wraps up the last unresolved thread from the first two books. Read the first two books first, but you’ll want to have this one handy when you finish Book 2. 🙂

This review of Everything We Give by Kerry Lonsdale was originally published on November 20, 2018.

This review of Everything We Left Behind by Kerry Lonsdale was originally published on November 18, 2018.

This One’s a Keeper. Maybe not the smartest idea I’ve ever had to read this one on a Bahamian cruise, as it is extremely emotionally intense. But an amazing story that I’m glad to have finally read, and presents an interesting twist that I had never seen a story really delve into. Very much looking forward to finishing out this trilogy and seeing where the author takes it.

This review of Everything We Keep by Kerry Lonsdale was originally published on November 18, 2018.