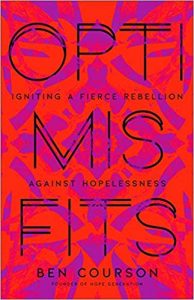 This week we are looking at a frenetically paced Christian self help book that contains a message many need to hear. This week, we aer looking at Optimisfits by Ben Courson.

This book was truly a frenetically paced manifesto of radical hope by clinging to nothing but Jesus Christ. At times, the wording evoked images of being shouted through a megaphone. The overall tone felt like a cross between WWE’s Mojo Rawley and his “All Hype All The Time” gimmick crossed with Canadian rapper Manafest’s breakout single “No Plan B” from several years ago. Courson does a great job explaining his philosophy and even references quite a few legendary Christian thinkers, from CS Lewis to G.K. Chesterton, and his message is one that should resonate in self help and Christian millenial/ GenX circles in particular.

The book as a whole is truly a great work, but there were a couple of problems with it. For one, Courson relies a bit too much on cliche catchphrases, liberally sprinkling them across nearly every chapter of the book. Another is that he proof texts quite a bit, though he also does a solid job of explaining several Biblical stories in more modern language. And the final problem is a general lack of citation. Given how much Courson makes some claim about something someone said and then just moves on with his point, a hearty bibliography and footnotes would generally be expected… but were not present in the Advance Reader Copy edition I read. Perhaps this will be better presented in the full publication edition, in which case this particular criticism would be rendered moot.

Overall this was an excellent introduction to a new to me Christian speaker and thinker, and I’ll likely be paying a bit more attention to future efforts from this author and recommend that you both pick up this book and check out his other efforts.

The Furious Longing of Hope. Courson is a clearly well read guy who is clearly a gifted speaker and writer. The beginning and parts of the end of this book felt like they were being shouted through a megaphone, which was actually a cool experience. The overall tone of the book was reminiscent of WWE’s Mojo Rawley – All Hype All The Time. And this tone interjected the book with a relentless pace that makes it a fairly quick read, even at its length. Ultimately I find myself dinging it a star due to overuse of cliche, “proof texting” – the practice of making a claim and citing a seemingly random Bible verse in support of it, and a lack of citations. I’m fine with making a claim like “scientists say blah” and moving on with your primary point, but give me the ability to go behind you and verify that they actually said blah. The message itself is great though, and many will find it needed and refreshing. Great book that just could have been better.